According to CDOT, Crews shifted two eastbound lanes on the westbound side with a concrete barrier separating the east- and westbound lanes.  This is a stable interim traffic pattern that will be sustainable until eastbound US 36 will be rebuilt following a major collapse of a section of the retaining wall and roadway due to settlement issues. 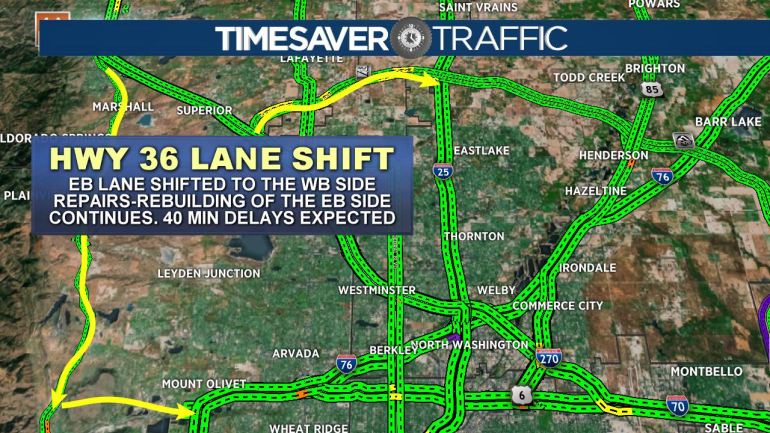 The heavily traveled highway between Denver and Boulder closed for repairs last week after a large crack appeared between Wadsworth and Church Ranch boulevards on July 8 and widened by Thursday.

“CDOT greatly appreciates the patience of travelers during this challenge with the roadway failure,” said CDOT Executive Director Shoshana Lew. “US 36 is a vital corridor to the Denver Metro region and it’s critical we keep all travel lanes open.  The CDOT team has worked around the clock to get eastbound travel lanes open as soon and as safely as possible to keep people and commerce moving. We are now working to get a contractor on board to rebuild the section of EB US 36 that collapsed, and we will continue to keep the public informed.”

About a half-mile section of US 36 near Wadsworth Blvd is now four lanes (two in each direction).  The Express Lane and shoulder in this area are operating as general purpose lanes (the Express Lane and shoulder on this small section of US 36 have been converted to two eastbound lanes. No tolls are applied to this section, but Express Lanes are operating as normal outside of the traffic configuration).  Travel is this area will be slower than usual, so motorists are advised to expect some delays and give themselves extra time when traveling the corridor during peak periods, according to a release from CDOT.

Even with the detours, CDOT said to expect delays in the area, including up to 40 minutes during the peak afternoon commute.

CDOT is offering free RTD rides on the Flatiron Flyer and Longmont/Denver bus routes, in both directions, on Monday and Tuesday.

The City of Aurora confirmed Thursday night that Deputy Chief Stephen McInerny was no longer employed by the department as of March 1.