DENVER — The Colorado Department of Transportation is urging drivers to leave work early Tuesday if they can.

Monday night, CDOT issued a warning about the impending storm that is expected to arrive Tuesday and last into midday Wednesday.

Record-breaking cold temperatures and significant accumulation is expected in many areas.

The National Weather Service has the entire Denver metro area under a winter storm warning from Tuesday morning to Wednesday evening.

Both Tuesday and Wednesday are Pinpoint Weather Alert Days.

Anywhere from 6 to 12 inches of snow are possible by midday Wednesday after a storm on Sunday night and Monday morning left up to 7 inches of snow in some areas near downtown Denver.

“Most affected areas will have up to one to two inches of snow per hour at some time during the storm. Expect icy conditions and snow packed pavements. Roads will be slick even with plowing and treatment,” CDOT said of the incoming storm.

The snow will move out about midday Wednesday.

The eastern Plains will see more snowfall from the second storm than the first with totals up to 10 inches possible. 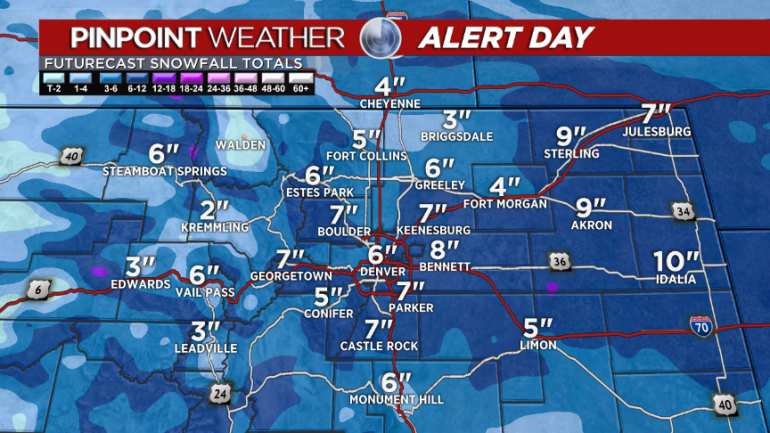 There will be breezy to gusty winds as the snow rolls through, making visibility and travel tough at times, especially Tuesday afternoon and evening.

CDOT says maintenance crews will continue to work 12-hour shifts until the storm passes. About 100 plows will be “out in force” in metro Denver through the storm, according to CDOT.

The department thanked drivers who avoided driving during the last storm, particularly along the Interstate 25 South Gap project between Castle Rock and Monument.

“Many motorists were slowing down with the help of the lower speed limit. This greatly helped plowing efforts and helped to reduce the number of crashes. We ask for your patience again as another storm brews,” CDOT said.

The department says commuters in metro Denver and those who travel the I-25 South Gap project should leave work early Tuesday if possible.

Additionally, CDOT said passenger vehicle traction laws will likely be in effect for mountainous portions of I-70.

Unseasonably low temperatures will increase the likelihood of snow-packed and icy roads.

Updated road conditions can be found on CDOT’s website.