PUEBLO, Colo.– A charter bus carrying 15 members of a church group ran off a highway after striking a bridge support Sunday in southern Colorado, killing two people and injuring several others, a state patrol official said.

The bus was carrying a charter group from a church in Albuquerque, New Mexico, and was traveling southbound on Interstate 25 when it struck the bridge structure and veered off the highway about 10 miles north of Pueblo, state Patrol Cpl. Ivan Alvarado said. 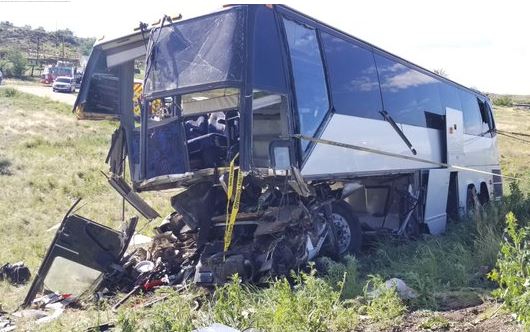 The driver, a 22-year-old man, may have had an unspecified medical issue that contributed to the crash, Alvarado said. The driver, whose identity wasn’t released, was ejected from the bus and died, he said.

The identity of the other person who died wasn’t immediately known. Thirteen other people sustained injuries varying from minor to critical, the state patrol said.

The bus was returning to New Mexico from a convention in Denver, The Pueblo Chieftain reported , citing Colorado State Police officials.

The group included high-schoolers who were returning from a meeting from the Steubenville of the Rockies Youth Conference in Denver, according to the Archdiocese of Denver.

The accident caused extensive backups in both directions of the interstate.

300 lb. bear rescued after being tranquilized in a tree

The late call was to rescue an animal stuck in a tree - but this was not a cat, or even another small pet. It was a bear.

MORRISON, Colo. (KDVR) - Health officials in Jefferson County have issued a warning to residents to be on alert for symptoms of bubonic plague.

On Saturday, a squirrel in Morrison tested positive for plague, which is caused by a bacteria called Yersinia pestis.

DENVER (KDVR) - Denver police are investigating after two juveniles were shot at a house party in the Montbello neighborhood.

One of the shooting victims died. The second had non-life threatening injuries.

300 lb. bear rescued after being tranquilized in a tree