DENVER (KDVR) — The record 2020 wildfire season burned hundreds of thousands of acres across Colorado. It produced burn scars in just about every region of the state. The blackened, charred aftermath over a large area is so extensive, you can see it from space. From orbit, it looks quite literally like a scar on the face of the Earth. This color-enhanced imagery reveals the distinct texture differences (painted in red) where the fire has cleared the land of underbrush and burned the needles off of the pines. 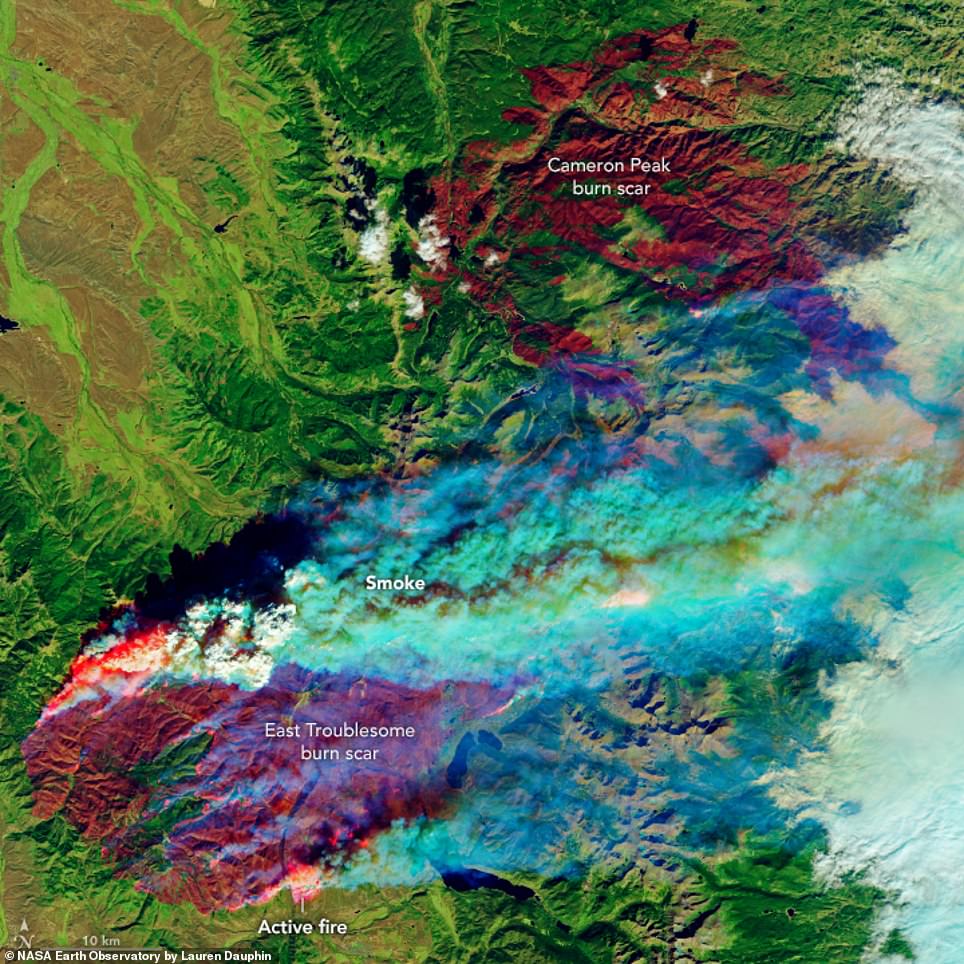 When dense forest burns, plants release waxy oils that coat the soil. The process of pyrolysis, when fire breaks down the wood and underbrush into different byproducts — in this case, water-repelling wax and oil, can cause nearly total water repelling. Like a virtual rain slicker, it forces the rain to bounce off and run-off, instead of soak-in. That waxy coating can make a packed-soil and gravel slope resemble asphalt where just about nothing can penetrate the surface. In areas where those hydrophobic coatings may not be as smothering, the absence of shrubs (now burned) and dead trees remove any potential for the plants to soak up what water falls. It simply becomes mud and results in release of gravel and boulders onto roads.

Even somewhat low-end rain can become an amplified torrent in burn scar, capable of causing flooding. An otherwise run-of-the-mill summertime thundershower lasting only 20 minutes can quickly become an out-of-control deluge. If it’s a more serious storm and slow-moving, like the type that happened in the Big Thompson flood of 1976 and the floods of 2013, a life-threatening flood can become a life-taking inundation. 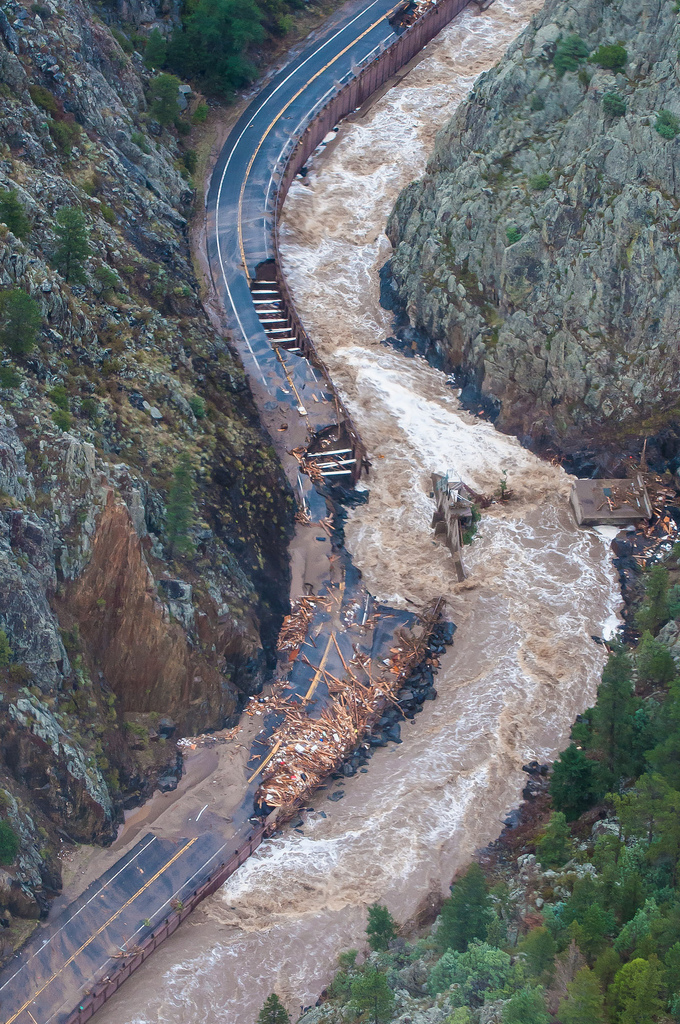 This weekend, the risk goes way up

A system is approaching right now and set to bring scattered slow-moving storms to the region on Saturday with a chance of a few reaching severe limits. These could pack large hail, gusty winds and the outside chance for a twister, especially in the northeastern plains. In the foothills and mountains, heavy rain will be the biggest threat. This could occur right over the burn scars of Larimer and Boulder Counties where over 1″ of rain could fall. If it happens inside of 30 minutes, we could see some issues. (The yellow shading indicates a slight risk, or a 2 out of 5, for severe storms if 5 is the highest chance, and that includes Denver. The darker green area represents a marginal but potential risk of 1 out of 5. The lightest green shading indicates a chance for non-severe thunderstorms, but still ones which could produce heavy rain.) 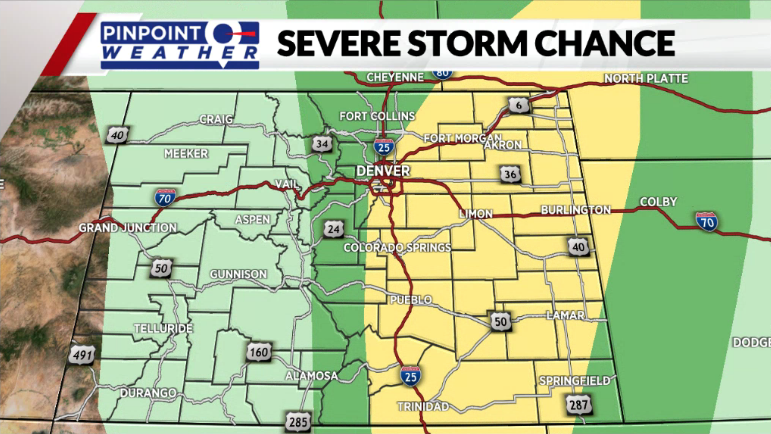 If you’re traveling through one of these areas (and you’ll know it when you look around and observe the blackened trees and absence of shrubs from burned land around), watch out for fast-rising waters. While you should never drive through flood waters, you’re more likely to see valley-floor rivers full or bursting, but elevated roadways may be okay. 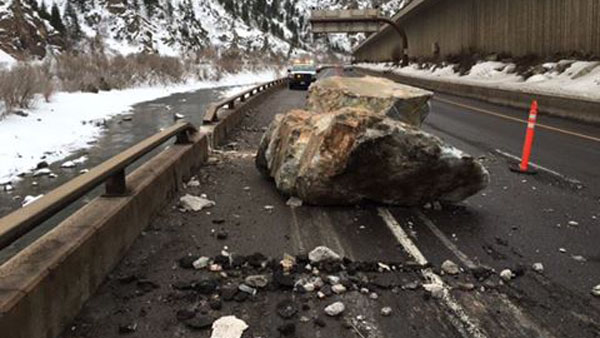 On roads, there is an outside chance for mudslides and falling rocks due to slopes becoming water-sodden and muddy. Previous rock falls in this region (above), along Interstate 70 in Glenwood Canyon have happened outside of flash flooding events, so this may be an especially enhanced risk in some stretches.

Perhaps the most traveled burn scar region will be in Glenwood Canyon along I-70 from last summer’s Grizzly Creek Fire. This road is mostly elevated, but water runoff and gravel could roll down the slopes along this stretch of the interstate, causing rock slides. Expect potential for safety closures at times this weekend in the region on this major cross-Colorado artery. If there is an actual flash flood warning issued, the Colorado Department of Transportation will close road access to the entire canyon. 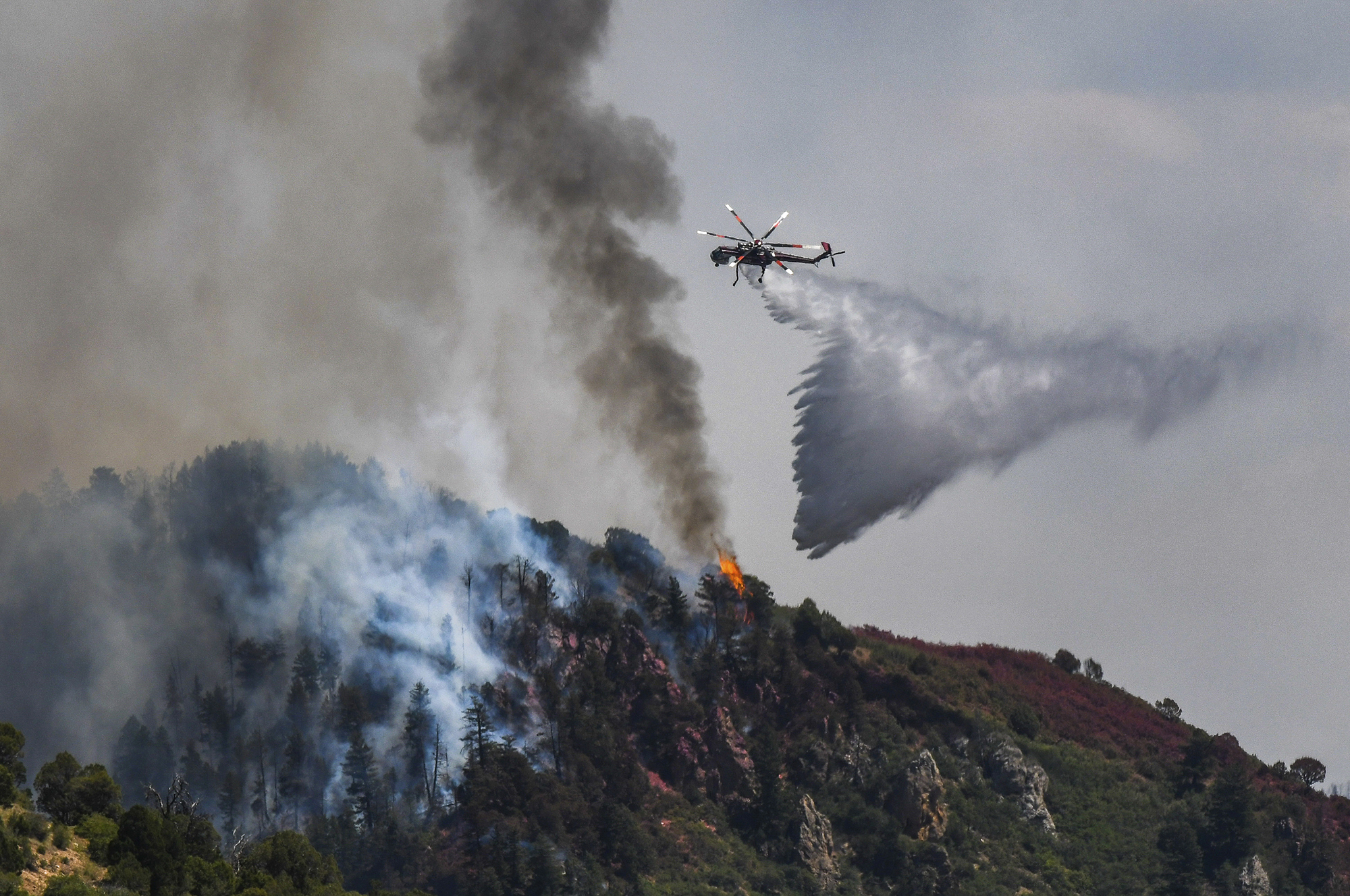 Colorado is ripe with epic mountain views, sweeping vistas of blue sky and snowy peaks, but the cost of such and epic landscape is the very real risk of extreme weather impacts, even when you least expect it. Be safe this weekend while on the roads or on the trails, and keep in mind that this is also lightning season — which is a major danger in itself.

Hanging Lake is within the Grizzly Creek Fire line, this photo shows smoke and flames in the area on Aug. 14, 2020. (Credit: KDVR)

Hanging Lake is within the Grizzly Creek Fire line, this photo shows smoke and flames in the area on Aug. 14, 2020. (Credit: KDVR)
Close
You have been added to Midday News Headlines Newsletter