SHARE
This is an archived article and the information in the article may be outdated. Please look at the time stamp on the story to see when it was last updated.
BOULDER, Colo. — The Boulder County sheriff and five deputies are named in an excessive force lawsuit after an inmate was tasered even though she was already in a restraint chair with her hands strapped behind her back and her head covered with a spit hood. 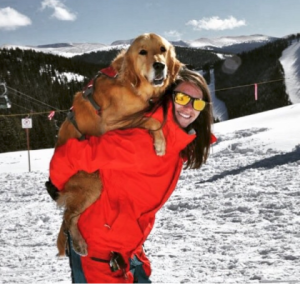 Lauren Gotthelf filed the federal lawsuit Tuesday morning for an incident that occurred Nov. 25, 2017. The 34-year-old was ticketed by a Boulder police officer for smoking on the Pearl Street Mall and allowing her service dog to be off-leash. When Gotthelf refused to sign the summons, she was taken to the Boulder County Jail. Once at the jail, Sgt. Chris Reiss can be heard on body cam footage telling Gotthelf, “Based on your suicide statements, you’re going on suicide watch.” Gotthelf is heard denying she made any suicidal statements but there is no body cam that recorded what she may have said moments earlier, only the interaction between her and deputies that followed. “You guys are nuts,” is what Gotthelf is heard saying to deputies when told she has to strip and put on a suicide smock. At one point, Gotthelf told deputies that she should be taken to a hospital if they believed she was a suicide risk. “You’re not going to a hospital, you’re going on a suicide protocol,” Reiss responded. 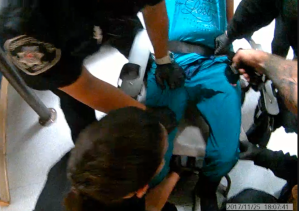 Suicide protocol often means placing the inmate in isolation with a smock so he or she cannot harm themself. Deputies determined Gotthelf was not cooperating even though she can be seen on body cam following orders to place her hands behind her back. According to the lawsuit, multiple deputies strapped “her into a restraint chair, and inflicting multiple pressure point pain compliance techniques, and culminating in Sergeant Reiss tasing her despite the fact she was fully retrained and could not move.” “That’s not going to help somebody who’s suicidal. That’s just sadistic,” said attorney Mari Newman, who represents Gotthelf and filed the lawsuit claiming excessive force and disability discrimination. 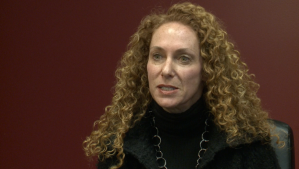 “If they truly believe that Lauren was suicidal, the best response would’ve been one of compassion one of humanity. But instead, what they did is immediately escalate the situation and treat her with unnecessary brutality,” said Newman. Gotthelf can be heard in the video saying, “You tased me for no reason,” and Reiss responds, “No, I didn’t.” Reiss can be heard threatening to tase Gotthelf again if she did not cooperate. “She was fully restrained, handcuffed behind her back and strapped into a restraint chair with somebody’s hands around her neck. I mean, she could not move if she wanted to and yet, they tased her,” said Newman. The lawsuit states after Gotthelf was tasered, she was forced to remain in the restraint chair for four more hours. The federal complaint also notes that the Boulder County Sheriff’s Office has a policy that allows detainees to be tasered even when they’re restrained. On Friday, the Boulder County Sheriff’s Office issued a statement about the incident. It can be viewed on the sheriff’s office website. The statement says the sheriff’s office has “factual disagreements” with Gotthelf’s allegations. It goes on to state that Gotthelf repeatedly refused to follow deputies’ demands and made “negative, vulgar and racist” comments to them. Additionally, the sheriff’s office said that due to Gotthelf’s “resistive behavior,” restraints on the chair could not be secured. “She was given several verbal commands to sit in the chair and stop resisting but continued to buck her body and be physically resistant. A sergeant touch tased her once with the ‘drive‐stun’ setting in the left thigh for pain compliance,” the sheriff’s office said. The sheriff’s office says after Gotthelf was stunned and a deputy restrained her head, they were able to properly secure all of the restraints. “In short, the deputies did not use excessive force against Ms. Gotthelf. They used a deliberate and calculated amount of the minimal amount of force required to reduce violence and ensure safety, in accordance to our Use of Force policy and our Conductive Energy Devices policy. The facts of this situation demonstrate, and the video supports, that the officers’ use of force was reasonable and in good faith,” the sheriff’s office said. Watch the video below. Note: It contains vulgar language.

Renters deal with heat issues ahead of freezing cold

How much can you make working at Casa Bonita?

How Denver rent compares to 99 other cities