DENVER (KDVR) — The days are getting warmer, the mercury is rising, and the planet Mercury is setting.

There’s a special play of planets in the sky each night, with Mars and Venus bright in the northwest during the evenings, then Jupiter and Saturn shining in the southeast sky in the hours preceding dawn.

But for the next 10 evenings, there’s a special sighting opportunity for the notoriously elusive planet Mercury; However, it’ll only be visible for about a week.

Mercury is the closest planet to the sun and shines light with a pale yellowish-orange glow. Some have never seen it, and some never will. That’s because it hides from us for much of the year, as it’s up in the sky during the day and hidden by sunlight.

The only lunar eclipse of 2021 is just days away

But from now until early next week, you can see this ephemeral body for a brief time just before sunset.

Now’s the time to see it

For each day that passes until Monday, May 24, Mercury gets more difficult to spot because it’s visible for fewer minutes each evening and becomes dimmer with each day. That’s because it sets earlier and earlier, eventually setting so early that the sky will be too light with daylight to be able to parse it from the twilight.

Once Mercury sets for good later this month, it’ll remain hidden until October 18, a span of nearly 147 days. When it does become visible next, it’ll be in the hours before sunrise. Much like our experience with Mercury this evening (but the opposite), once the sky brightens up enough toward sunrise, the first planet from the sun will fade into daylight and out of sight.

Keep in mind, even during this autumn when Mercury becomes observable on October 18, it’ll only last until November 1. That means in 2021, you can only see it for 35 days, if you’re really looking for it.

One perk about Wednesday night is that, this time of year, the planet appears slightly brighter, so your chance of seeing it is slightly higher.

Where to look and how to find it

You’ll need a wide view of the western horizon and only then, you might spot it low in the sky. Keep in mind that it will set shortly after sunset, so to catch it, there’s a race between the fading sunlight and the planet falling below the horizon. 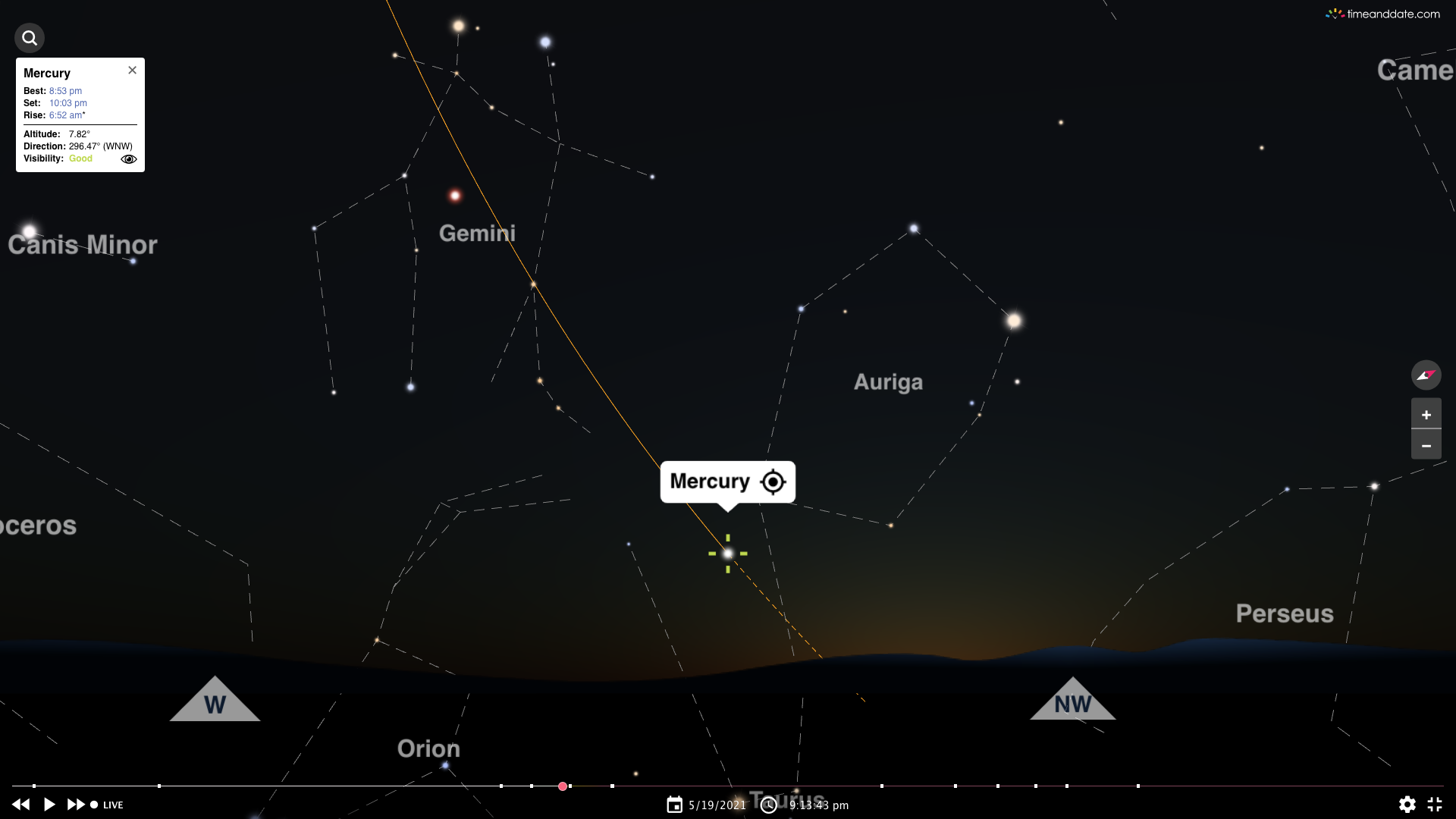 If you’re not sure where Mercury is, try this tip: Look for Venus (one of the brightest objects in western sky after sunset) and you should spot Mercury very near. Binoculars or a telescope may be a good option to brighten it up, if you’re not far enough away from city lights.

Beyond light pollution, the best place to get a clear view will be in the far eastern Colorado plains, where the mountains aren’t quite as much of a “wall” from features on the western horizon. Of course, clouds are always a wildcard this time of year with the afternoon storms still dissipating around sunset.

Good luck sky watching and if you happen to spot the planet, you’re in a club of few!

Mercury orbits close to the sun.

Mercury orbits close to the sun.
Close
You have been added to Midday News Headlines Newsletter