LAKEWOOD, Colo. -- Lakewood police are warning people to be on the lookout for a person shooting people at random with a BB gun.

The victims include a man on his bicycle, a grandmother walking a child in a stroller and two young girls.

"It's alarming just because there's been so many in such little time, and you could hurt somebody," says Lakewood Police Department spokesperson John Romero.

All four victims suffered minor injuries, but are expected to be OK.

In the past two months, police say 28 businesses in the area have been vandalized by someone using a BB gun. It's unclear if these incidents are related.

"Property damage is bad enough, it's mom-and-pop shops we're seeing a lot of on Wadsworth, which is bad enough. But when it's involving people, especially juveniles or somebody riding a bike, or again a woman pushing a baby in a stroller, that's just unacceptable," says Romero.

Nathan Beauchamp and Joshua Gross were on their way to go biking at Green Mountain Thursday when a bicyclist started gesturing for help.

"We had the window down and a cyclist flagged us down and said he just got shot," says Beauchamp. "He pulled up his shorts and he had a big welt on his leg where he had been hit by a BB." 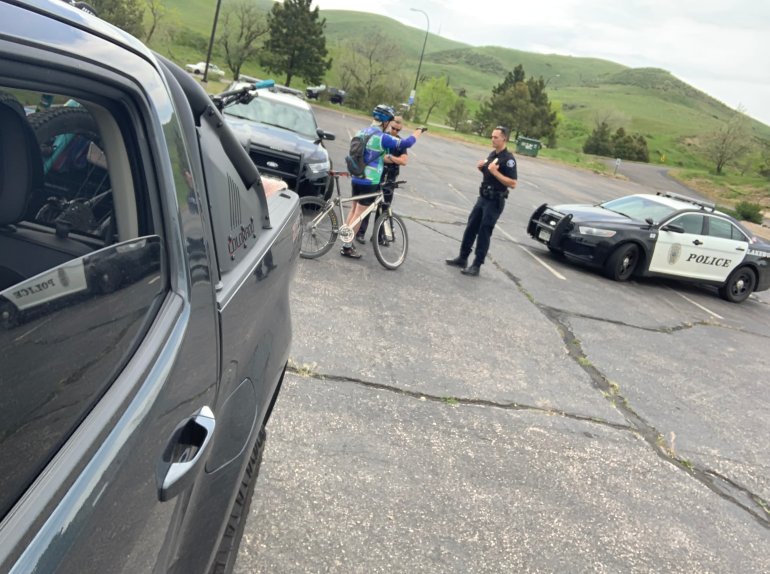 Beauchamp called 911 and waited with the man for police to arrive. He says officers were there in less than a minute because they were already in the area responding to similar calls.

"Whoever it is that's driving around shooting people with BBs needs to go to jail," he said.

Beauchamp says the cyclist was shot in the thigh.

"He said he was on his bike and he started [hearing] this little ping-ping sound, and about the time he realized it was something hitting his bike. Then, he got hit and looked down and saw he was hit and saw a car go flying past him the other direction on Jewell," Beauchamp said.

Lakewood police have not released a description of the suspect or the suspect's car.

"We're just asking the public, if you know anything about this, please come forward. We really don't want more people to get hurt," says Romero.

"Who knows what comes next?" asks Beauchamp. "If somebody is shooting windows out, and then cyclists and a grandma and children, I mean, who knows what that person is capable of?"

DENVER (KDVR) – The University of Colorado Denver has been forced to cancel a study abroad experience in China due to the new coronavirus. Instead, some 400 students and 20 faculty members will need to study online for their safety. Meanwhile, Chinese students already in Colorado are reacting to the epidemic impacting their home country.

American commercial aircraft carriers have suspended flights to China. Getting there has not been easy. Many international students have plans to go home when the current semester ends in May. But will they be able to achieve that?

GREELEY, Colo. -- The Greeley Police Department said four people safely escaped from a hostage situation at a home Wednesday. The suspect remains inside.

According to GPD, at 2:39 p.m., officers responded to a restraining order violation in the 2800 block of Aspen Avenue. When they arrived, they found a man refusing to leave a home.