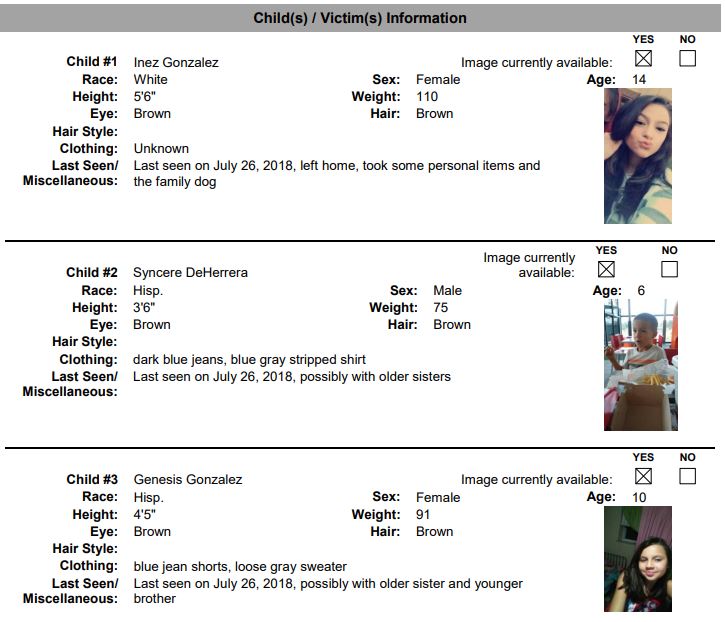 ARVADA, Colo. — Three sibling juveniles were reported missing in Arvada on Friday morning, according to the Colorado Bureau of Investigation.

The CBI said their mother came home at 6:30 a.m. and discovered the front door unlocked and all three children gone.

The three left with some personal items from the bathroom and the family dog. The dog’s leash and water dish were also missing.

They might be with Josias Rivera, who is a runaway from Denver and a friend of Inez Gonzalez. They all might be on foot or on RTD lines.

Inez Gonzalez is described as white, 5-foot-6 and 110 pounds with brown eyes and brown hair.

Genesis Gonzalez is described as Hispanic, 4-foot-5 and 91 pounds with brown eyes and brown hair. She was last seen wearing blue jean shorts and a loose, gray sweater.

DeHerrera is described as Hispanic, 3-foot-6 and 75 pounds with brown eyes and brown hair. The child was last seen wearing dark blue jeans and a blue gray-striped shirt.

There was no description or photo of Rivera released.

DENVER (KDVR) -- Families living near site of Denver protests over the death of George Floyd are dealing with the effects even as they try to stay away.

"People started screaming and running and then tear gas," said Jacqulyn Murray who lives just a block from the Capitol Building.

DENVER (KDVR) -- The Federal Bureau of Investigation is investigating after a laser was repeatedly pointed at a Denver news helicopter Thursday night.

A spokesperson for the Denver Police Department confirms their helicopter, which was monitoring the protests, was also hit with a laser.

DENVER (BusinessDen) -- The Racines restaurant site isn’t the only spot at the southwest edge of Capitol Hill being eyed for multifamily development.

On the same day last week that Virginia-based AvalonBay Communities submitted its plans to the city for Racines, Atlanta-based Gables Residential proposed a project a block north.

Denver weekend forecast: Highs in the 80s, rain could be heavy in spots