The Federal Heights Police Department said a resident claimed he started the fire near West 92nd Avenue and North Tejon Street and that there were explosives in the home. 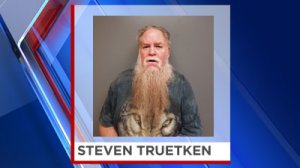 The man, 56-year-old Steven Truetken, was taken into custody.

The Adams County bomb squad was called to investigate his claims.

Police were forced to block access to the neighborhood during the investigation.

A number of neighbors were evacuated and remained out of their homes late Wednesday night.

Police said they received information when they first responded that someone poured gasoline on a home and set it on fire.

“He had planned this event for some time, that he intentionally introduced gasoline into and around the home of his neighbor, and ignited the gasoline … knowing that at least one person was in the home,” police said.

“He then set his own home ablaze. He further added that he had run a hose from his water heater gas line into the home and planned to fill it with natural gas in order to destroy his home, but failed to activate the valve.”

Police also said Truetken told about his motivation and work was being done to verify his statements.

Neighbors will be allowed to return to their homes once the bomb squad determines the scene is safe.

The American Red Cross said there were about a dozen families who had to find other places to stay for the night. It was unclear how long the evacuation order would last.

Firefighters from several agencies responded to extinguish the flames.

The fire sent up black smoke that could be seen for miles beginning around 4 p.m.

There were no injuries reported.

DENVER (KDVR) -- The Colorado Department of Public Health is holding a news conference to discuss the continuing impacts of COVID-19 in the state and the rollout of various vaccines.

You can watch the conference live above, and check back after it ends for a replay.

DENVER (KDVR) --Snowfall totals climbed quickly across northern and northwestern parts of the metro area Thursday morning. As of Wednesday, Colorado was 10.7 inches short of the seasonal average, and 3.8 inches under the February average snowfall. This snowstorm completely wiped out those deficits.

Share your photos to our gallery by clicking the "Submit Your Photo" button at the bottom of this article. We will share as many photos as we can on TV and social media.

DENVER (KDVR) -- Thursday is a Pinpoint Weather Alert Day. Several inches of snow fell overnight across much of Colorado. The Thursday morning commute will be treacherous. Many schools have closed and others will be attending remotely

We will provide updates throughout the storm.