WASHINGTON — Sue Wagner of the Bank of Colorado and Patrick Sobers of Community Banks of Colorado met with President Trump in the Oval Office on Wednesday. 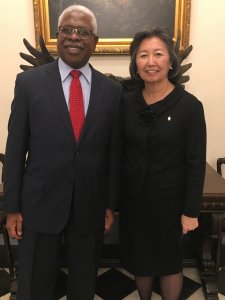 Wagner and Sobers were invited to participate in a tax reform even with the president.

Both finance leaders committed to handing out $1,000 bonuses to employees after the tax reform passage late last year.

After the event, Wagner said it was inspiring to be in the Oval Officxe.

“It took me a while to get my mouth closed again and then President Trump was very approachable when we were in there, which was a nice surprise,” Wagner said. “He has a genuine interest in everyone benefiting  from this tax bill.”

Sobers also committed how much of an honor it was to meet the president.

“It was a very good experience the president was very welcoming and we had a pleasant conversation about the impact of the tax reform legislation,” Sobers said.