WASHINGTON — An annual report by the Environmental Working Group found that nearly 70 percent of samples of 48 types of conventionally grown produce were contaminated with pesticide residues.

The EWG Shopper’s Guide to Pesticides in Produce, released Wednesday, ranks pesticide contamination of popular fruits and vegetables based on more than 36,000 samples of produce tested by the U.S. Department of Agriculture and the Food and Drug Administration.

This year, strawberries remained at the top of the list of produce with the highest concentration of pesticides, while sweet corn and avocados were ranked as having the lowest concentration.

Pesticides are widely used in producing food to control pests such as insects, rodents, weeds, bacteria, mold and fungus. In addition to their uses in agriculture, pesticides are used to protect public health by controlling organisms that carry tropical diseases, such as mosquitoes.

Pesticides are potentially toxic to humans, according to the World Health Organization. They might have negative effects on reproduction, immune or nervous systems, cause cancer and lead to other problems.

Pesticide residue can remain on fruits and vegetables even after they are washed and, in some cases, peeled, according to the report.

However, a report by the USDA in 2014 found that “overall pesticide chemical residues on foods tested were at levels below the tolerances established by the Environmental Protection Agency” and were not a safety concern to consumers.

Produce that tested positive for various pesticides and contained higher concentrations of pesticides than other produce is featured on the list, known as the “Dirty Dozen.” 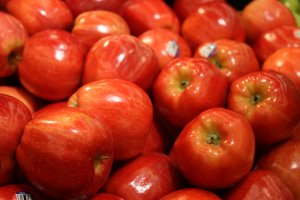 Strawberries remained at the top of the list with at least 20 pesticides, while spinach jumped into the second spot with twice as much pesticide residue by weight than any other crop.

Americans eat nearly 8 pounds of fresh strawberries per person each year, and even when they are rinsed in the field and washed before eating, they are still most likely to be contaminated with pesticide residue, according to the Environmental Working Group.

In 2016, spinach was ranked eighth, but the latest numbers from the USDA showed a sharp increase in pesticide residues on nonorganic spinach since the crop was last tested eight years ago.

The pesticides responsible for the residues included three fungicides and one insecticide called permethrin, which has been linked to tremors and seizures in the nervous systems of animals and insects.

The newest additions to the list were pears and potatoes, which replaced cherry tomatoes and cucumbers from last year.

Produce that had relatively fewer pesticides and lower total concentrations of pesticide residues was placed on the group’s “Clean Fifteen” list.

Only 1 percent of samples showed any detectable pesticides in avocados and sweet corn, which were deemed the cleanest produce.

More than 80 percent of pineapples, papaya, asparagus, onions and cabbage that were sampled showed no pesticide residue.

DENVER (KDVR) -- The Centers for Disease Control and Prevention estimates tens of thousands of sexually transmitted infections are not being treated due health care demands of the COVID-19 pandemic. Doctors fear less screening during the early days of the pandemic has led to an even more serious STI epidemic in America.

Over the last four to five years, Colorado has seen increasing rates of STIs, according to Dr. Karen Wendel, director of HIV and STI Prevention Control at Denver Public Health. STI rates nationwide have been at record highs, according to the CDC.

As COVID-19 changed our way of life, health care resources shifted dramatically to focus on the novel coronavirus.

DENVER (KDVR) -- Flu shots are in high demand and some clinics in the Denver metro are already reporting a short supply. But doctors say waiting until October could provide the best immunity.

Health care workers across Colorado and throughout the Northern Hemisphere are preparing for the battle of two respiratory illnesses this flu season.

DENVER (KDVR) -- The Colorado Department of Public Health and Environment (CDPHE) is not revealing the status of its review of a state waiver program that allows paramedics to administer ketamine to agitated patients, but some are questioning whether the review has begun.

“I cannot provide any additional information at this time,” Peter Myers, a spokesperson for the CDPHE said.

Near record-high temperatures to end the workweek, dry forecast continues