And perhaps most impressive, MacKenzie has lost — and kept off — 100 pounds.

MacKenzie dreams of being Ms. Olympia, the world’s best female bodybuilder. Envisioning her in that role is a bit of a stretch for strangers looking at her tiny 5-foot-5-inch frame. But those who know what she’s already done to reach her goals have no trouble imagining it.

After MacKenzie’s parents divorced when she was 9, she lived with her father and brother in her grandfather’s house in Windsor, Ontario, just across the border from Detroit. MacKenzie spent most of her time in the basement, looking at YouTube videos, eating hot dogs and French fries and drinking soda by the pack.

“I ate a whole pizza in a night,” she recalled. “I didn’t know the feeling of being full.” 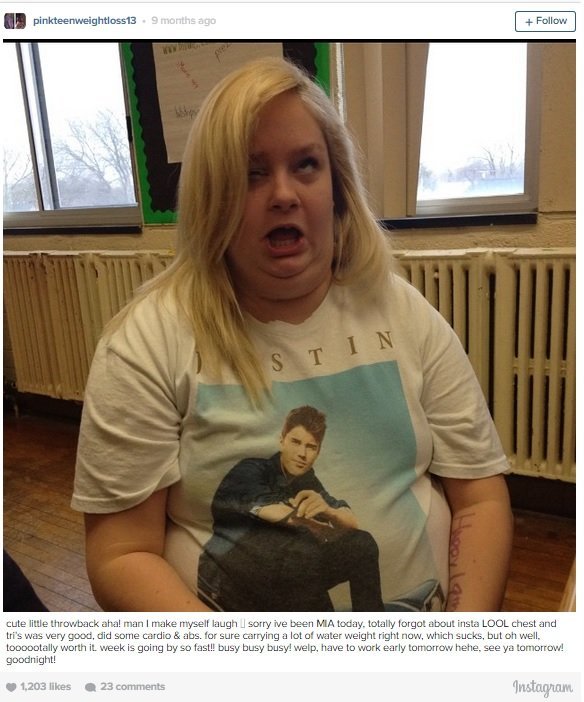 Entering fifth grade, MacKenzie weighed 170 pounds. By the time eighth grade rolled around, she had reached 223 pounds. She developed a defense mechanism to ward off bullies — her friends loved when she made gross faces and mocked her own double chin.

She worried occasionally about Type 2 diabetes — her grandmother lost a leg to the disease — but couldn’t seem to stick to diets she halfheartedly attempted.

Then, in March 2013, MacKenzie went shopping for her eighth grade graduation dress. She had made a pact with her best guy friend that they would kiss for the first time. She looked for size 16 dresses, but after she tried a few on, the salesclerk directed her to another store. She walked out with a size 22 dress.

“That was where my heart just kind of sank,” she said. “Thoughts started rolling in about dying, of not waking up one morning.”

On grad night, MacKenzie chickened out on the kiss. “I couldn’t even look him in the eyes because I felt so bad for him.”

She went home and swore she was going on a diet, but again failed to follow through.

In September, MacKenzie entered high school at around 200 pounds. She walked down the halls thinking about all the people who must be staring at her, “the fat girl.” After a few weeks, she’d had enough. Her dad had signed up for gastric bypass surgery and was about to go on a presurgery liquid fast. She decided she would match his weight loss by going on a diet of her own.

The myth of the ‘after’ picture

The first 45 pounds were almost easy. MacKenzie stopped eating after 7 p.m., prepared a week’s worth of healthy breakfasts, lunches and dinners on the weekend, and jogged every night around a local park.

In December 2013, she signed up for Instagram and her world exploded with inspiration. She followed bodybuilders who had the sculpted physique she dreamed of. She discovered the Insanity fitness program. She learned from fellow Instagrammers that she wasn’t eating enough, and was doing too much cardio, so she increased her calorie intake and began lifting weights.

She tried a low-carb diet, carb-cycling and clean eating, then finally started counting macronutrients, the eating plan she follows today.

By March 2014, she had lost 70 pounds. But her dream “after” photo remained elusive.

Because she had lost so much weight so rapidly, MacKenzie had a “hang,” or loose skin hanging from her stomach. It’s a common problem for people who lose a large amount of weight; they often find the skin around their thighs, middle, arms or neck doesn’t snap back into place. As MacKenzie’s doctor told her, “Once you blow up a balloon, it’s always going to have wrinkles in it.”

MacKenzie used the hang as motivation, pushing herself harder at the gym. But she started experiencing back pain from having her center of gravity constantly pulled forward. And the hang got itchy and hot, even in Ontario’s freezing winters.

Her trainer told her she needed an abdominoplasty, better known as a tummy tuck. But for every plea MacKenzie sent to plastic surgeons in Canada and the United States, requests were denied, her age circled in red.

Plastic surgeons have to be cautious about adolescent patients, said Dr. Felmont Eaves, former president of the American Society for Aesthetic Plastic Surgery, who was not involved in MacKenzie’s case. Teens, he said, often base their decisions on social status or emotional insecurities. It’s a dilemma more plastic surgeons may have to face as parents and experts fight back against childhood obesity, and more hospitals accept adolescent bariatric surgery patients.

“It’s important to understand their motivation and where they are psychologically,” Eaves said. “You don’t want to operate on something you don’t have to.”

Rebound is a big concern with weight loss, he said; patients who have lost a lot of weight are at high risk for gaining it back. A lot of surgeons also encourage female patients to wait until after childbirth to have a tummy tuck done. Still, if an adolescent patient shows a healthy attitude, commitment to change and realistic expectations about surgery, she is really no different from a healthy adult patient, Eaves said.

“There are some 16-year-olds who are amazingly secure and have good insight, and there are 25-year-olds who are clueless,” he said. “So as long as they’re mature enough to follow instructions, … having this type of operation would be very reasonable.”

Maturity is exactly what Dr. Anthony Youn saw in MacKenzie when he read her email. “She wasn’t asking for a Barbie doll body,” he said. “She told me what she wanted to lose — and it was all the signs of her previous life, the life before she took as good care of herself as she is now.”

Youn scheduled a consultation with MacKenzie and her father at his office in Troy, Michigan. He was impressed by the research they’d done and agreed to perform the surgery at the end of July. The only problem: It would cost the Walkers close to $9,000.

“How do we afford that?” Scott Walker remembered thinking. “We’re an average working family. I’m a single parent, and to afford a surgery that expensive … I didn’t know how I would come up with the funding.”

True to form, MacKenzie didn’t let that stop her. She set up a GoFundMe page online and asked her Instagram followers for help. Then she turned to her coach, Chris Jones, aka Beastmode Jones, who is well-known in the online fitness world. Close to 700,000 people subscribe to his YouTube channel, which features video tutorials for bodybuilders and his clients. Jones posted a video asking for help for MacKenzie. In less than two months, MacKenzie had the funds she needed.

MacKenzie’s Instagram feed is full of selfies — MacKenzie posing in the mirror at the gym; MacKenzie showing off her muscles; MacKenzie’s before and after shots. If the likes and comments on her posts are any indication, her followers love it. In January, she published a 30-page e-book about her weight loss journey, which she sold for $13 on her website.

She used the money she earned from the book sales to take her dad to Disney World for his 50th birthday. “(The book) did really well,” she said modestly, shrugging her shoulders.

The father-daughter duo are incredibly close. Scott Walker went through his own weight loss journey after gastric bypass surgery, going from 276 pounds to 160. They support each other, each making sure the other never veers too far off track. Scott manages MacKenzie’s website, where she interacts with her clients. She typically has around 50 for whom she provides weekly training and eating plans.

As MacKenzie headed into her tummy tuck surgery on July 28, Scott Walker leaned down and kissed his daughter on the forehead. His words seemed to stick in his throat: “I’m going to be waiting for you. I’ll see you after. I love you.”

“Come on, Dad, keep it together,” MacKenzie joked as she was wheeled toward the operating room.

Any surgery carries risk, Youn said. With an abdominoplasty, there’s a risk of bleeding and blood clots. Tummy tucks have a particularly high risk of deep vein thrombosis, which can be fatal. But MacKenzie’s surgery went smoothly. Youn was able to remove more than 3 pounds of excess skin and tighten her ab muscles. After spending the night in the hospital, MacKenzie returned to Windsor with her dad.

Two days after surgery, MacKenzie was still in a lot of pain. Her lower half was swollen, tight and extremely uncomfortable. For a week, she had to stay completely bent over. Youn said it’ll be months before the swelling goes down completely, but MacKenzie is already back at the gym.

She recently bought a bikini for her birthday beach trip in December. It’s the first time she’s felt optimistic about showing off her abs.

“I’m extremely glad that I had this surgery,” MacKenzie said gleefully. “I can finally pull off that transformation that I’ve wanted to do for so long.”

DENVER – A bill to expand insurance coverage for fertility treatments in Colorado passed out of committee in the state House of Representatives Wednesday.

The Colorado Building Families Act is sponsored by Reps. Leslie Herod (D-Denver) and Kerry Tipper (D-Lakewood). The bill would require health benefit plans regulated through the division of insurance to cover diagnosis, infertility treatments like IVF and fertility preservation services.

Dr. Jason Kelly, the Chief Medical Officer at Sky Ridge Medical Center joined us this morning to inform us the difference between the flu and the Coronavirus. Dr. Kelly breaks down the main symptoms for each and how patients are treated.