The undocumented immigrant and mother of two will be forced to leave the United States. LaTorre has called the U.S. home for 17 years, and both of her children are U.S. citizens.

“The fact that the governor did not approve my pardon and couldn’t find it in his heart to fight with my family, destroys my heart,” LaTorre said.

After days of fasting, nights spent at the governor’s house and hours in his office, LaTorre was faced with the answer she didn’t want to hear.

She started living in sanctuary in November and left the church when she got a stay of removal. That stay ends on Friday.

“I must consider the impact of Ms. Encalada LaTorre’s crime on the victim, and most importantly, the precedent clemency would establish,” Hickenlooper said in a statement. 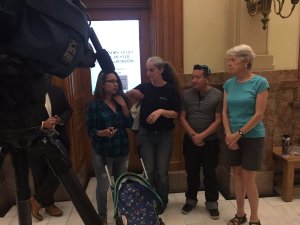 The governor did talk with LaTorre over the phone, but the decision was delivered by his staffers.

​LaTorre pleaded guilty to identify theft in 2010 after she stole a name and Social Security number to get a job.

“The crime that Ms. Encalada LaTorre committed was not victimless — far from it,” Hickenlooper said. “Granting Ms. Encalada LaTorre’s application would compound the injustice of this unfortunate situation, and it would be a step backward in the fight for smart, compassionate and comprehensive immigration reform.”

“She paid with probation, she paid all of the taxes, she paid everything that she was asked to do,” Jennifer Piper said as she translated LaTorre’s thoughts.

The pardon was LaTorre’s last chance to stay in the United States, so now the question isn’t if she’ll leave, but when.

The family doesn’t know what’s next and they don’t know when LaTorre will have to leave.

“I am hoping that immigration will be able to give me a little bit of time to get my things together. I’ve been waiting for three months for my oldest son Bryant’s passport and it still hasn’t arrived and my youngest son has an evaluation for his eyes next week so I’m hoping that I can stay for those things,” LaTorre said.

U.S. Immigration and Customs Enforcement said it would provide an answer on Friday on what the governor’s decision means for LaTorre.