FORT COLLINS, Colo. -- Bell ringers for the Salvation Army are used to seeing a variety of donations from pennies to poker chips but for at least a decade, someone in Colorado has been donating a rare gold coin.

The coin, known as a Krugerrand, was donated on Saturday outside a Kings Soopers off of South College Avenue. The generous coin collector worked hard to keep the donation a secret and is believed to have wrapped the coin in a one dollar bill before putting it in a Salvation Army bucket. 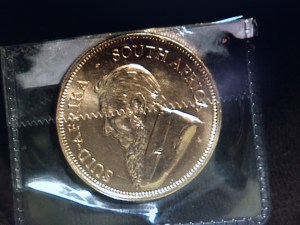 "He's got it in a nice protected case to keep it safe," said Rob Covert, a captain with the Salvation Army of Fort Collins. Covert showed KDVR the coin on Monday and expressed the charity's gratitude for the mystery donor.

"We're extremely grateful for their generosity and their support to the salvation army," added Cpt. Covert.

The charity said for at least a decade someone has been donating the coin around Fort Collins, often to recognize a bell ringer who exemplifies the Christmas spirit. As is tradition, a few days after the donation, the coin's owner sends a representative to the charity who then trades a cash donation to return the coin.

Teigen's post, an emotional message and series of pictures, was met with criticism from some social media users who said such a private moment shouldn't be publicly shared.

JOHNSON COUNTY, Ind. (WXIN) – An abandoned dog that was found tied to a tree in Indiana a few weeks ago not only has a new home, she also has a new job.

Like many around the country, White River Township Fire Chief Jeremy Pell was moved by the story of “Roadie,” who was found with a heartbreaking note from her owner.

DENVER (KDVR) -- In today's COVID-19 world, remote learning can sometimes be monotonous and mundane. However, a mechanical engineering class at the University of Colorado Denver was anything but boring on Wednesday when several pornographic images appeared on students' computer screens during the virtual class.

"I messaged a few of my friends saying, 'Hey, did you see that?'" said Andrew Alcott, one of the 30 or so students who saw the images.

Want a unique experience? Go on a ‘goat walkabout’