DENVER -- Denver's hometown airline is still reeling from Saturday's snowstorm that's canceled flights, leaving passengers stranded and in many cases without their luggage.

A spokesman for Frontier Airlines said it should've precanceled flights but it didn't anticipate such a large amount of snow.

Early predictions called for 1-3 inches of snow in the city with up to to 5 inches at Denver International Airport, but the airport ended up receiving  8 inches of snow Saturday.

Faulkner said 70 percent of the flights system-wide were delayed and that the airline now has extra people at the airport getting bags to the rightful owners.

The airline flatly denies that some 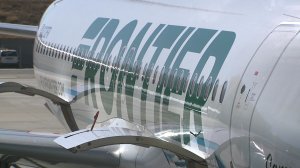 workers from Simplicity USA, which does ground crew operations for Frontier, walked out.

It said the issue was that the workload was more than it normally staffs for and some employees had trouble getting to work on time.

Frontier could face fines from the U.S. Department of Transportation if federal investigators determine the airline abused its authority to keep passengers on the tarmac for more than three hours.

According to a department spokesman, arriving domestic flights are not allowed to remain on the tarmac for more than three hours without providing passengers an opportunity to deplane, with exceptions allowed only for safety or security, or if air traffic control advises the pilot in command that returning to the terminal would disrupt airport operations.

Violations of the department’s regulations subject carriers to civil penalties of up to $32,140 for each violation.

She said the plane never rolled up to a gate. Instead, firefighters helped passengers exit the plane on a ladder.

"To our passengers, we're with you," said Capt. Brian Ketchum, chairman of the Frontier Pilots' Union. "The pilots ... we’re frustrated.

Ketchum blames management's reliance on a low-cost model that provides no room for error.

"There's limited resources in terms of keeping the operation tight," Ketchum said. "It presents itself more dramatically when there’s a disruption like there was this last weekend."

"If you’re a big carrier, you can recover from this a lot quicker. American Airlines can get you to Orlando through four different places plus a nonstop. Frontier can’t do that because they’re a smaller airline."

Alvin Autry of Littleton said his wife was supposed to fly home Monday from Milwaukee.

Now, Frontier says the soonest they can fly her home is Thursday.

"While my wife was on the phone telling me that her flight was delayed until Thursday, they were sending me promotions for cheap air fares like $34 ... and I’m kind of like I don’t think I don’t want to book anything right now," Autry said.

Passengers who want to request a refund can fill out the form on Frontier's website.

"If the very dangerous & unfair Section 230 is not completely terminated as part of the National Defense Authorization Act (NDAA), I will be forced to unequivocally VETO the Bill when sent to the very beautiful Resolute desk," Trump tweeted late on Tuesday.