WELD COUNTY, Colo. — A fire and explosion at an oil well site near Windsor Friday night injured one worker according to the Weld County Sheriff’s office. Crews worked most of the day Saturday to extinguish the flames.

Investigators started their work at the site near Highway 392 and County Road 21 late Saturday afternoon.

The worker who was hurt was taken to a hospital. He was in stable condition Saturday according to Extraction Oil & Gas, the company that owns the site.

Firefighters and the oil company’s onsite team were still working Saturday to extinguish flames. Windsor-Severance Fire Rescue hasn’t been able to send in its investigative yet, so they don’t know what caused the initial explosion.

The company released a statement Saturday.

“We can confirm that a fire occurred late yesterday evening at one of our locations in Weld County, Colorado, and was contained not long after it occurred. Regrettably, an individual working onsite was injured at the onset and was taken to a local hospital. He is recovering in stable condition and our thoughts are with him for a speedy recovery.”

A fire department spokesperson said there is no indication the rig could explode again or is any sort of hazard to the community.

The spokesperson also said they have had no calls, incidents or complaints related to this particular site before Friday night.

“Loud boom and house shook,” FOX31 viewer Rachel McCarter said in an email right after it happpened. “Hearing there may be a fire at a well site.”

A Windsor-Severance Fire Rescue spokesman said the fire was under control by 11 p.m. Crews from several agencies from across northern Colorado arrived to fight the large fire.

The Loveland Fire Rescue Authority was among the agencies that responded. It provided firefighting foam with its aircraft rescue and firefighting trucks from Northern Colorado Regional Airport.

RELATED: See photos of the fire from viewers, firefighters and SkyFOX

Firefighters said it was a complicated fire for them to fight because they didn’t know what substance was burning.

There was still heavy traffic in the area Saturday because of people driving by to check it out. The fire department asked people to stay away so emergency responders have room to get their fire trucks in and out.

There is no water available on the site so firefighters were hauling water from hydrants in Windsor.

According to the more recent inspection report available through Colorado’s Oil and Gas Conservation Commission, the well passed its inspection in July 2017. Fire investigators will now work to determine what went wrong.​

Prayers to the firefighters and people involved in the explosion in Windsor tonight😢 #Windsor #Colorado @KDVR pic.twitter.com/1iw2O5RKLy

Just shot this video of an oil rig fire about 2 miles SE from our house in Windsor CO. The explosion was so loud that it shook our house! You would have thought a bomb went off! pic.twitter.com/EQ7Zs3pbxh 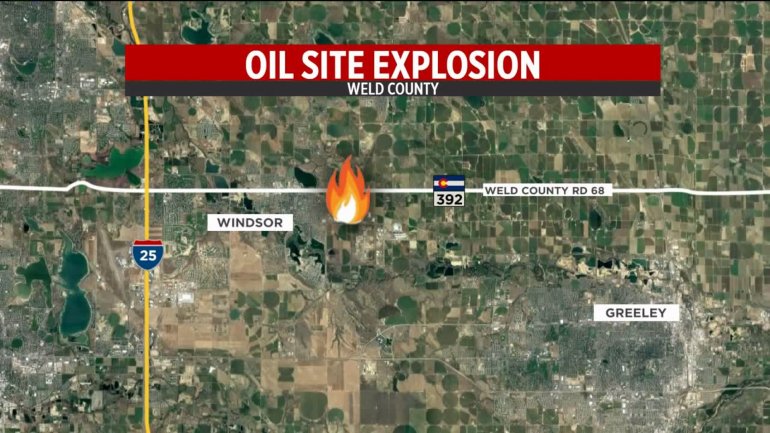