AURORA, Colo. -- A Facebook post written by an Aurora woman has her in trouble with the law. It’s a post that will frustrate any animal lover. 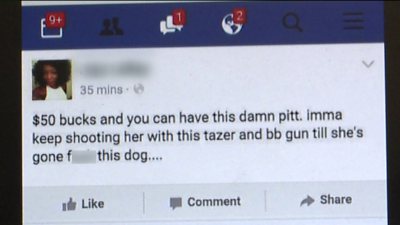 They’re words Aurora police say popped up on Cherica Winston's Facebook page over the weekend. It was language describing dogsitting a canine she couldn't care less about.

Enough people saw her posting on Facebook that they forwarded them to the Aurora Police Department, which posted them on its Facebook page.

Residents were outraged and relieved to hear police were in pursuit, tracking down the dog at at Winston's Emporia Street home.

"A small dog, located in a small crate, the dog was all by itself,  no type food or water," Aurora police Sgt. Chris Amsler said. "There was an awful smell. ... The animal had been peeing in the crate and was soaked in the urine."

And while Winston faces charges of animal cruelty, the 31-year-old won't face charges for the alleged Facebook threats after detectives said they found no evidence she carried through on the torture she boasted about.

"Our officer didn't find any evidence that the dog had been tased or shot with a BB gun," Amsler said.

Winston’s friend Travis Smith alerted police. He said he messaged Winston about her post, but she mouthed off to him.

“My immediate reaction is ‘Oh, my God!’” Smith said. “I’ve never seen anything like that before."

Smith’s work with a nonprofit agency, impactlocally.org, which helps the homeless, inspired him to step in to help the dog.

“I have two dogs myself,” he said.

For now, that small dog is doing better, in the care of the Aurora Animal Shelter,receiving some much needed TLC. The shelter is not releasing a picture or video of the dog.

And while Winston posted the dog is a "pitt," authorities and the animal shelter will not confirm if it is a pit bull, a banned breed in Aurora.

"This is a great example of how a group of people saw something that concerned them, told us and we were able to get successful resolution,” Amsler said.

The Aurora Animal Shelter is not saying how long it will keep the dog before putting it up for adoption.

DENVER (KDVR) -- Bannock Street will soon be permanently closed to vehicle traffic in front of the City and County Building.

EL PASO COUNTY, Colo. (KDVR) -- The El Paso County Sheriff's Office said Thursday that it will be searching for Gannon Stauch near Highway 105 and Highway 83 on Friday. The intersection is located in the northwest portion of the county east of Monument.

Gannon, 11, has been missing since Jan. 27. His stepmother, Letecia Stauch, said she last saw him between 3:15 and 4 p.m. heading to a friend's home in their suburban neighborhood just southeast of Colorado Springs.

US stocks again sold off sharply on Thursday as worries about coronavirus mounted. The three main indexes fell into correction territory and are on track for their worst week since the financial crisis.

The Dow dropped 1,191 points, or 4.4% in its worst one-day point drop in history. The index has fallen more than 10% below its most-recent peak, putting it in correction.

‘Non-criminal, outdoor death’ closes portion of I-25 near University Boulevard

Warmer days ahead outnumber days with snow in Denver, Colorado