DENVER — Denver Public Schools Superintendent Susana Cordova said Thursday that she does not yet know if all schools will be able to open Monday in the event of a teacher strike.

Cordova said whether any schools will close all depends on their ability to staff and ensure students’ safety.

“Safety is our number-one concern. If we don’t have enough people to cover, we’ll let our parents know,” Cordova said.

Cordova said she and her team are going to continue working to get a deal with the teachers union through the weekend.

DPS already announced that early childhood programs will not be offered if a strike occurs as planned. That affects 4,714 students.

DPS is still working on getting enough temporary staff hired to replace the teachers who will be striking. Due to Wednesday’s snowstorm, a hiring fair for substitute teachers (also known as guest teachers) has been rescheduled to Friday. It will be held from 9:30 a.m. until 1 p.m. at 1860 Lincoln Street downtown.

The district has about 1,200 active substitutes and has recently hired 300 more specifically for the strike. It also has 1,400 Central Office employees who will be deployed to schools during a strike.

Mayor Michael Hancock said his office is also preparing for a strike.

“We’ve pulled together a resource team. Our rec centers are already on alert and preparing to probably see more young people than we’re used to seeing,” Mayor Hancock said.

The mayor said he is not taking sides in the debate.

“At the end of the day, you know, I’ve always said the number-one most important issue here is what’s in the best interest of our students. And that means we got to make sure that our teachers are there and that they are productive and that they’re well paid,” Hancock said. “That’s why it’s important that we make sure teachers get what they need out of this conversation. We also got to recognize that the district has finite resources.”

Additionally, Cordova addressed some teachers’ concerns about not getting the pay they previously received when their school was classified as “Type 1,” indicating a high percentage of students who come from low-income households.

“We’d be very willing to work with our teachers on a way to ensure that if your school drops below, how can we think about something that isn’t a cliff, but sort of a step-down approach? And that’s what we can do if we negotiate,” Cordova said.

The Denver Classroom Teachers Association said it would be holding a food donation drive for students at three locations on Friday and Sunday: 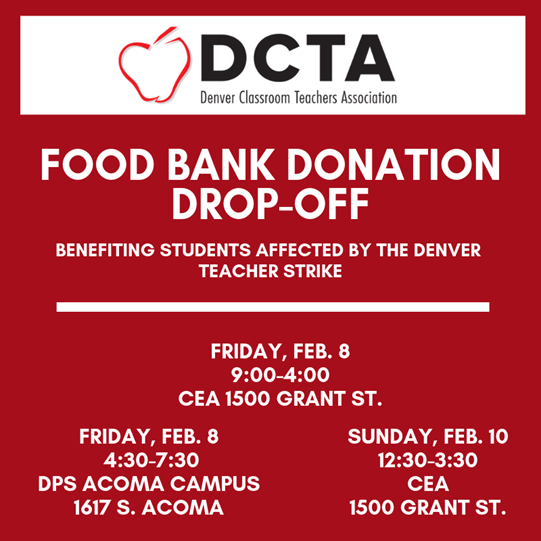 The DCTA said its next bargaining session with DPS is scheduled for 5 p.m. Friday.

On Monday, the DCTA will hold a press conference at 6:30 a.m. at South High School. Educators are scheduled to picket at DPS schools between 7 a.m. and 9 a.m. At 2 p.m., a rally will be held on the west steps of the Colorado State Capitol.