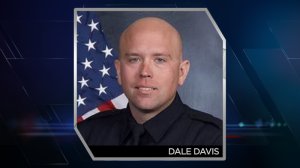 ARAPAHOE COUNTY, Colo. — An Arapahoe County sheriff’s deputy and a Colorado State Patrol trooper were rushing to the scene of the same crash when they collided last month. Now the deputy is facing charges.

Deputy Dale Davis and Colorado State Patrol Cpl. Ivan Alvarado were involved in a crash on June 17. Both were responding to a report of a road-rage incident involving a handgun at East 80th Avenue and Schumaker Road.

Alvarado had to be extricated from the unmarked Dodge Charger. Alvarado is a 10-year veteran of the CSP, officials said.

Davis was driving a Ford Expedition and was taken to a hospital by ambulance. Davis is a six-year veteran of the agency, officials said.

Both men suffered serious injuries, the Aurora Police Department said. Alvarado was airlifted to a hospital.

On Thursday, 17th Judicial District Attorney Dave Young announced Davis had been charged with careless driving resulting in injury and failing to drive on the right side of the road in connection with the crash.

Davis was served with a summons and complaint on Thursday for the traffic infraction.