DENVER — The Secret Service said Tuesday it is taking “appropriate action” after one of its agents suggested on Facebook that she would not defend President Donald Trump should someone try to shoot him.

Kerry O’Grady, a senior agent in the Denver field office, made a series of now-deleted postings on Facebook during the campaign saying she supported Democrat Hillary Clinton and that she would not honor a federal law that prevents agents like her from airing their political beliefs publicly.

O’Grady deleted the posts shortly after the Washington Examiner reported them on Tuesday.

“As a public servant for nearly 23 years, I struggle not to violate the Hatch Act. So I keep quiet and skirt the median,” she wrote in one Facebook post, as reported by the Examiner. “To do otherwise can be a criminal offense for those in my position. Despite the fact that I am expected to take a bullet for both sides.”

“But this world has changed and I have changed. And I would take jail time over a bullet or an endorsement for what I believe to be disaster to this country and the strong and amazing women and minorities who reside here. Hatch Act be damned. I am with Her.” 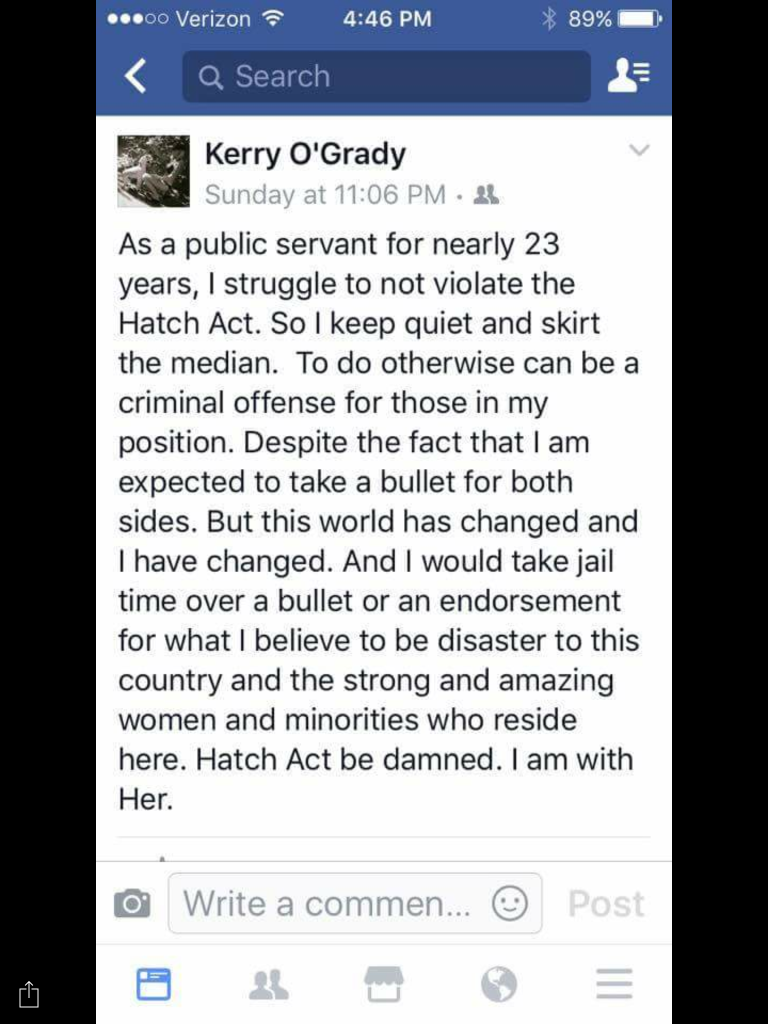 The Secret Service said in a statement that it could not comment on a specific personnel matter but that it was “aware of the postings and the agency is taking quick and appropriate action.”

“All Secret Service agents and employees are held to the highest standards of professional and ethical conduct,” the agency said in a statement. “Any allegations of misconduct are taken seriously and swiftly investigated.”

The U.S. Secret Service is aware of the postings and we are taking the appropriate action.  This is a personnel matter and we will not be commenting further.

All Secret Service agents and employees are held to the highest standards of professional and ethical conduct. Any allegations of misconduct are taken seriously and swiftly investigated.

The postings were on O’Grady’s personal account, noted a person familiar with the matter, but said the agency is trying to determine if she posted the information while she was working.

Reached on the phone, O’Grady on Tuesday declined to comment on the postings.

The person familiar with the matter said Secret Service officials are extremely disappointed with what the agent did, especially because the agency did a lot of good work with the campaign and inauguration.

Secret Service personnel on multiple occasions have rushed to protect Trump from threats during the campaign, including one incident in Reno, Nev., in the final weekend before Election Day.