DENVER — A longtime Denver Post sports reporter no longer works for the newspaper after he was slammed for a tweet that was quickly deleted when Takuma Sato of Japan won the Indianapolis 500 on Sunday.

“Nothing specifically personal, but I am very uncomfortable with a Japanese driver winning the Indianapolis 500 during Memorial Day weekend,” Terry Frei tweeted after Sato became the first Japanese driver to win the prestigious race. 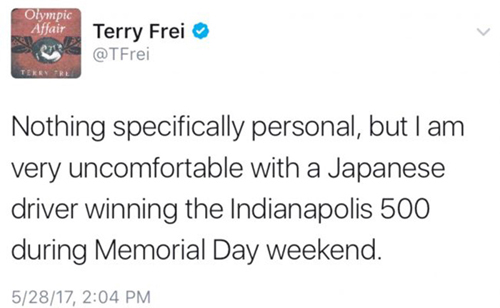 “I was shocked,” said Clarence Low, president and CEO of the Denver Asian Chamber of Commerce.

Low said the tweet is not only insulting to his community, it disrespects the numerous Japanese-American veterans who fought for the United States.

Many of those veterans from World War II were honored Monday at Fairmount Cemetery’s Nisei Veterans Memorial.

“The service we had today was to honor those who have fallen and fought for our country,” Low explained.

The tweet was deleted, but a screenshot of it quickly made the rounds.

Frei then offered a half-hearted apology, tweeting, “I apologize.”

The Post tweeted an apology, saying Frei’s tweet “does not reflect the standards and value of our organization.”

On Monday morning, the Post said Frei no longer works for the newspaper. It’s unclear if he was fired or resigned.

“We apologize for the disrespectful and unacceptable tweet that was sent by one of our reporters,” Post publisher Mac Tully and editor Lee Ann Colacioppo wrote in a statement on the newspaper’s website. “Terry Frei is no longer an employee of The Denver Post. It’s our policy not to comment further on personnel issues.

“The tweet doesn’t represent what we believe nor what we stand for. We hope you will accept our profound apologies.”

Later Sunday night, Frei tweeted a lengthier apology, then deleted it and replaced with a revised version to remove the title of one of his books.

“I made a stupid reference, during an emotional weekend,” wrote Frei, whose father was a World War II veteran and flew recon missions over Japan.

Low hopes Frei will reflect on what he wrote. Low is hopeful Frei will make an effort to get to know Asians on a deeper level.

“I think it’s just a symptom, frankly, of the direct dialogue and rhetoric that we have in our community and nationwide these days,” Low explained.

Attempts to reach Frei were unsuccessful.