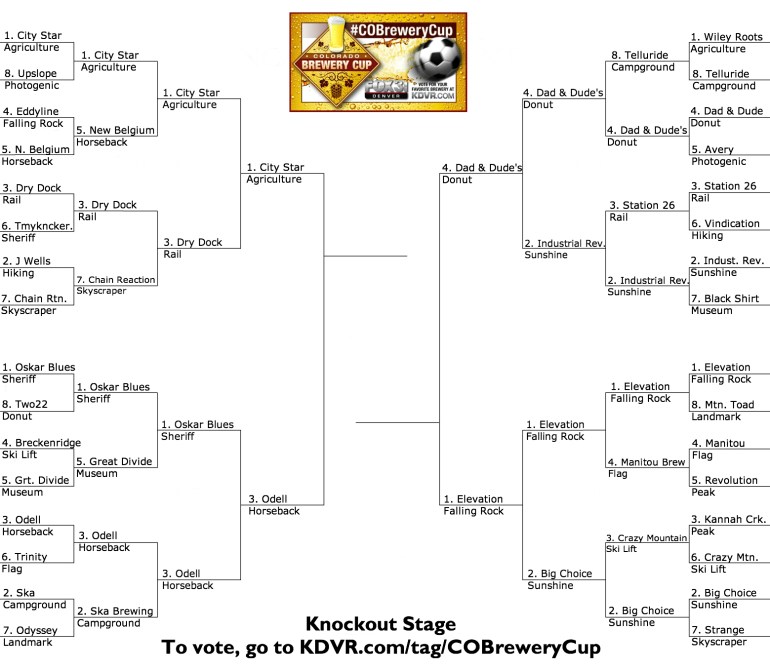 RELATED: Click for the AM round of semifinal voting

Happy Fourth of July Colorado beer drinkers, and welcome to the second half of the Colorado Brewery Cup semifinals!

Because today is a day that typically lends itself more to enjoying a frosty beverage than it does to reading about one, we’ll try to keep this short and sweet.

Close to 4,000 votes were tallied on Thursday, as the field that started with all of Colorado’s 200-plus breweries was trimmed down to these final four.

Elevation Brewing Company (Poncha Spring) and Dad and Dude’s Breweria (Aurora) got off to a rousing start in the first semifinal of the day. In fact, with 466 votes counted, the two were dead even.

This afternoon’s matchup features a pair of breweries that had no trouble getting here. Small-town City Star Brewing (Berthoud) has gotten more votes than every other brewery in the state during each round, and Fort Collins powerhouse Odell Brewing Company has knocked off some other powerhouses — Oskar Blues Brewery and Ska Brewing (Durango) — in the Knockout Stages.

Up until this point in the competition, we’ve briefed you with our own words on the remaining breweries in the Cup. It’s high time we heard from you.

Why? Because the customer is always right, and because a picture is worth a thousand words.

Just a reminder, you can still vote in the morning matchup as well as this one until 8 p.m. tonight. Yes, that’s earlier than the 10:30 p.m. deadline we’ve had for all past Knockout Stages, but we wanted to close the polls a little early today to give you all a chance to enjoy this festive evening’s activities — and perhaps to celebrate advancing to the Colorado Brewery Cup Finals!

@CityStarBrewing thank you for Vaquero. Hands down best beer I've had and worth the trip to Berthoud! pic.twitter.com/eyQNL6q90C

DENVER (KDVR) -- A new partnership is aimed at protecting animals across the state. Our partners at Metro Denver Crime Stoppers have teamed up with Colorado Animal Protectors to increase rewards for animal abuse and neglect cases.

The cases are heartbreaking and all too frequent. Metro Denver Crime Stoppers said about 10% of its cases are animal abuse cases.

(NEXSTAR) -- A 3-year-old cat with more than 33,000 Instagram followers died after a brawl at a park in the Greenpoint neighborhood of Brooklyn, New York, according to multiple reports.

Chanan Aksornnan was walking with her cat, Ponzu, and three other pets on Easter Sunday when a boy reportedly tripped over Ponzu's leash and injured him.

Deadly crash on I-70 near Bennett closes highway eastbound

Calling all artists: proposals for piece in Convention Center being accepted

American honey may contain traces of nuclear fallout from 50s and 60s: study

It’s easy to compost at home with these tips

Recycling tips for the whole family