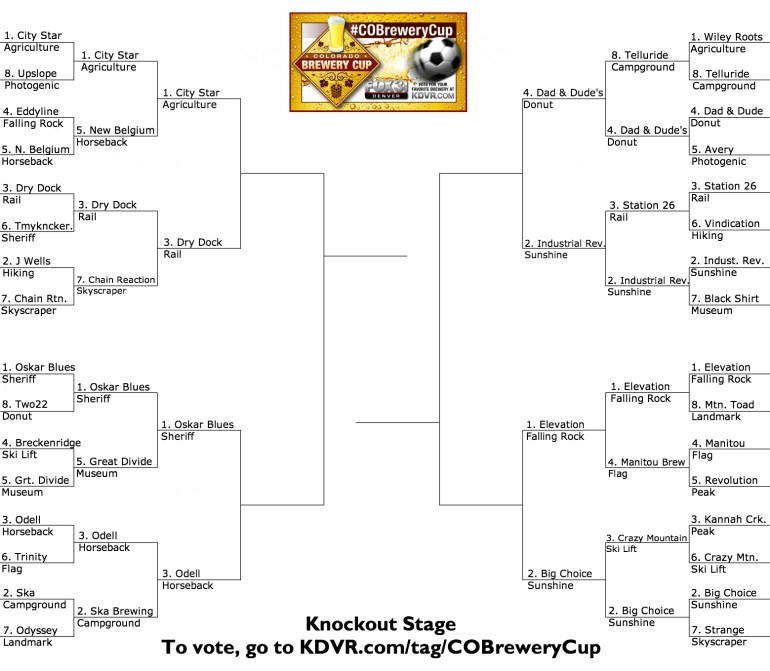 RELATED: Click for the PM round of knockout stage voting

We have since narrowed the field to eight worthy breweries, all of which will be up for voting in today’s quarterfinal Round of 8. As has been the case in all knockout stages, there will be two round of voting — one beginning Thursday morning and a second Thursday afternoon.

You can vote in both portions of voting up until 10:30 p.m. Thursday night.

It appears clear that the neighborhoods across the state — both big and small — are bursting with pride for their local breweries. Perhaps most impressively, Berthoud continues to show up in droves to support City Star Brewing, which for a sixth straight round, collected more votes than any other brewery.

Poncha Springs, a town with a population of just over 700, managed to wrangle up 631 votes to help their beloved Elevation Beer Co. to a win, while Dad and Dude’s Breweria of Aurora, the lowest remaining seed in the tournament, pulled out another close win, as well.

Though they ultimately were eliminated, several other breweries put together equally-inspired efforts on Wednesday. That group included Crazy Mountain Brewing Company and Telluride Brewing Company, both of which offered free beers to customers who gave them a vote in the Round of 16.

But there can only be one champion, and today we’ll get a step closer to plucking that winner out of a field that included each one of Colorado’s 200-plus breweries when the Group Stages began last Friday.

In honor of the Round of 8, we’ve put together a list below of eight specific details about each of the remaining breweries. Seven of the eight categories are self-explanatory. The one that isn’t is “BA of 85,” which deals with the ranking system devised by BeerAdvocate.com.

As part of that ranking system, Beer Advocate doles out aggregate scores based on beer drinker feedback on a great deal of recipes offered by craft breweries across the country. A score of 85 is the lowest for a beer to be deemed “very good.”

Below, we’ve spelled out which of each brewery’s regular, non-rotating beers have been awarded a score of 85 or better — along with those aforementioned seven other details.