LOS ANGELES — A Colorado route was selected Thursday as a finalist for the Hyperloop One high-speed transportation network, the Colorado Department of Transportation said Thursday.

The 360-mile route from Cheyenne, Wyoming, to Pueblo by the Rocky Mountain Hyperloop team was one of 10 selected.

It would service 10 urban centers and more than 4.8 million people, and include a leg that extends to Vail. 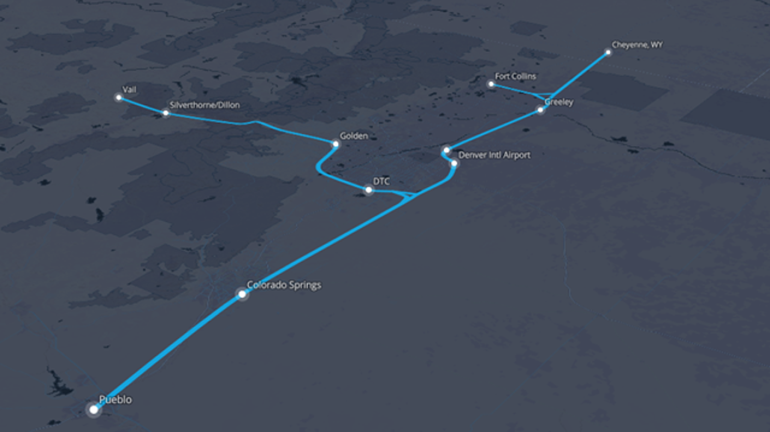 Hyperloop One will commit resources and work with the Rocky Mountain Hyperloop team to determine the commercial viability of the route.

CDOT will enter a public-private partnership with Hyperloop One to begin a feasibility study in the state for the route.

“We are excited​ to partner with Hyperloop One in exploring the next step of feasibility of this innovative technology, potentially transforming how Colorado moves,” CDOT executive director Shailen Bhatt said.

“The Hyperloop technology could directly align with our goals of improving mobility and safety in Colorado, and we have been encouraged by the continued progress the technology is taking.”

Hyperloop One built a one-third mile loop in Nevada and launched the competition in 2016. It narrowed it to 24 finalists in April.

The technology of Hyperloop One puts passengers and cargo into a pod with gradual acceleration by electric propulsion through a low-pressure tube.

The pod then lifts above the track using magnetic levitation and glides at airline speeds for long distances. Hyperloop One had a successful full-scale test this summer, achieving record test speeds.

The Front Range route would allow travelers to reach their destinations within minutes, the Rocky Mountain Hyperloop team said.

The challenge of finding routes involved more than 100 countries.

“The Hyperloop One Global Challenge started as a call to action for innovators, engineers, trailblazers and dreamers around the world who shared our vision of creating a new mode of transportation,” said Shervin Pishevar, co-founder and executive chairman of Hyperloop One.

The winning teams were chosen on specific criteria, including well-defined routes and implementation strategies, involvement from public and private sectors, business cases, and innovative and creative applications.

“We had tremendous interest in this competition, and these 10 teams each had their unique strengths in showcasing how they will alleviate serious transportation issues in their regions,” Hyperloop One CEO Rob Lloyd said.

“We’re also excited about the partnership with CDOT and AECOM, which was a direct result of the Global Challenge and a testament to the power of open innovation.

“This is unprecedented and demonstrates how quickly the public-private sectors can partner to make Hyperloop systems a reality around the world. Studies like this bring us closer to our goal of implementing three full-scale systems operating by 2021.”

The 10 routes are in the U.S., Canada, India, Mexico and the United Kingdom.

Amnesty International Canada says it was hacked by …

Amnesty International Canada says it was hacked by …

What newly passed laws mean for the state budget

Best tools to give as gifts

Best smart home gifts for everyone in your life

Denver ranked one of most sinful cities in the US

1 killed in major crash on I-70 near Golden

This is the most popular Christmas movie in Colorado