CASTLE ROCK, Colo. — A 7-Eleven worker in Castle Rock has been arrested twice in two days. First for allegedly a stealing a customer’s credit card and then for harassing the victim to get the charges dropped.

Kumar Shivdutt, 20, was arrested Wednesday for stalking/emotional distress and violations of bail bond conditions. That followed his Tuesday arrest for identity theft and unauthorized use of a financial transaction. 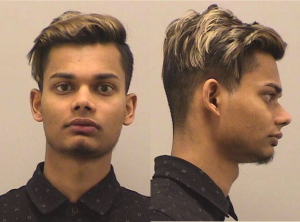 Shivdutt’s mugshot shows highlights in his hair. Lewis said they were paid for with her debit card.

Lewis said Shivdutt racked up more than $900 in expenses and another $200 overdraft fees.

“He cleaned out my bank account… stole food out of my kids’ mouth. I couldn’t buy diapers. I couldn’t get groceries,” she said.

When Lewis contacted the 7-Eleven store, she began receiving texts from Shivdutt promising to pay her back, though not admitting he was the actual thief.

Lewis shared the texts with FOX31. 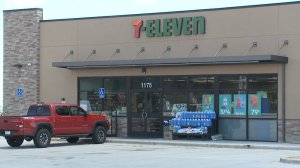 In another text, Shivdutt writes, “We will help you. Nd still u are rude. I tell you you get ur money back but still you are so rude to me.”

Lewis texts back, “I am rude? Is that a joke? YOUR employee put my family through Hell.  I’m starting to think it was you who did the charges, and not your employee.  Still haven’t told me who he is.

Shivdutt responds, “You want your money back right. I tell you You get ur money. Then why the so many question” 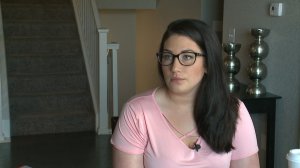 Lewis said Shivdutt tried to negotiate how much he would pay her back and when.

“It made me so angry, I have not slept in over a week,” Lewis said.

When Castle Rock police confronted Shivdutt, he confessed and was arrested on Tuesday. Lewis never predicted she would hear from him as soon as he bonded out Wednesday morning.

“Literally right when he got out of jail, he went to the 7-Eleven and blew up my phone just call after call, text after text,” Lewis said.

This time, a Castle Rock police detective had Lewis’ phone in his possession and immediately went back to the 7-Eleven and arrested Shivdutt for stalking and violating his bond conditions.

According to the probable cause statement, a detective wrote, “The victim has received more than 15 phone calls from SHIVDUTT who had recently been released from jail.”

Later in the same report, the detective writes Shivdutt, “Admitted that he did continue texting and calling after the victim had asked him to stop.  He also admitted that he had been advised not to contact the victim by the court.”

“He broke the protection order and honestly my family was a little scared he was going to show up to my house,” said Lewis.

According to the probable cause statement, Shivdutt apologized to police for contacting Lewis and asked if he could pay her back to avoid going to jail.

Police said he could not and took him back to the Douglas County jail, where he remained in custody as of Wednesday afternoon on a $2,500 bond.

Flying from DIA? You can rent your car out while you’re gone

DENVER -- Next time you fly out of Denver International Airport, your parked car can earn you a little extra cash — if you’re willing to let a stranger get behind the wheel.

LANSING, Mich. (WJW) -- A woman accused of setting a fire that killed her boyfriend's mother and two nephews reportedly texted the boyfriend right before the blaze.

The Lansing State Journal reported that according to an affidavit, the text read: "I'm outside your mom's house...I hope your mom likes being burned alive."

LOS ANGELES (NewsNation Now) — It was eerily empty both outside and inside the Staples Center in Los Angeles during the run-up to an Emmy Awards unlike any other.

Many nominees are expected to take part from their homes, hotels and other remote locations due to the pandemic. The 72nd Emmy Awards are being hosted by Jimmy Kimmel.

Flying from DIA? You can rent your car out while you’re gone