In a news release, the district attorney’s office alleges Armstrong repeatedly assaulted a 13-year-old female student at the school from August 2012 to May 2013.

Armstrong was taken into custody Tuesday afternoon and was advised of the charges Wednesday morning. Bond was set at $20,000. He is due in court Friday afternoon.

Westlake Middle School sent a letter to parents to address the arrest. 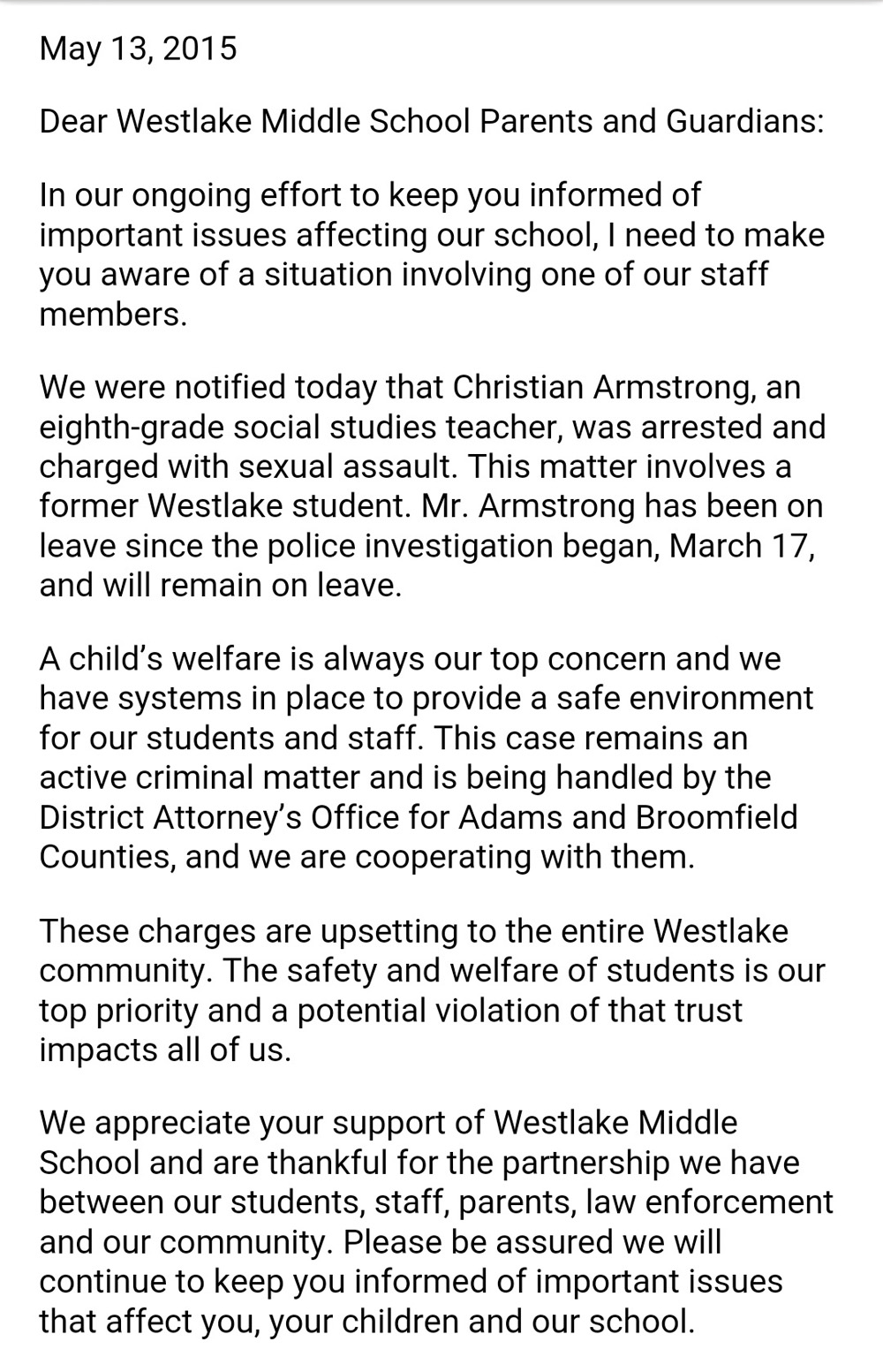 The letter said Armstrong has been on leave since the investigation began March 17.

“These charges are upsetting to the entire Westlake community,” the letter read. “The safety and welfare of students is our top priority and a potential violation of that trust impacts all of us.”

Armstrong’s attorney, Christopher Decker, released a statement on behalf of his client Thursday:

“In order to preserve and foster fair judicial proceedings in this matter Mr. Armstrong will refrain from public commentary on the specifics of what has been alleged against him.

He is confident that the judicial system will ultimately resolve these very public and inflammatory charges in a fair and just manner.

This can only happen however if the American system of justice is allowed to work as designed, based on competent evidence, and the rule of law, not based on media reports, rumor, innuendo, speculation, or fear.

Sadly many in this community have already formed strong opinions on matters about which they have no knowledge. Thankfully, those who know Mr. Armstrong remain faithful of his respect for the law and outstanding character.

The Armstrong family respectfully requests that they be provided privacy during the pendency of this public matter, and not be subject to aggressive and disrespectful attempts to seek comment or responses to these allegations.

These serious accusations must, and will only be addressed, in and through the judicial proceedings of this criminal case.

The charges which have been filed here are not evidence of crimes. Rather, they amount to an obligation for the government to now come forth and provide compelling proof, with competent evidence, and at a fair trial, as to each count.

Only when this judicial process has been completed will Mr. Armstrong have further comment regarding this matter.”

DENVER (AP/KDVR) — Johan Larsson tipped in the go-ahead goal with 15:54 remaining, Antti Raanta stopped all 16 shots after taking over early in the third period when Darcy Kuemper left with an apparent injury and the Arizona Coyotes beat the Colorado Avalanche 3-2.

Derick Brassard and Jakob Chychrun also had goals for the Coyotes. Early in the third, Kuemper dropped down on one knee with the puck going the other way and asked the official to stop play. The trainer momentarily checked on the starting goaltender before he skated off and was replaced by Raanta.

DENVER (KDVR) -- Coloradans are working hard to book their COVID vaccine appointments. Some traveling as far as Texas to get it done.

But those staying in the area to get their vaccine told FOX31 and Channel 2 that despite the time and effort in booking their vaccine appointment they showed up and were turned away.

BOULDER, Colo. (KDVR) — Boulder Police have released 14 new images and one new video of individuals involved in violence and destruction of property during the riot over the weekend.

The images show individuals flipping a vehicle on its side, another kicking the flipped vehicle, some standing on top of vehicles and someone lighting a firework in the middle of the street. The short video clip shows several people hanging onto a moving fire truck.