ARVADA, Colo. — Adrienne Stone can’t seem to stay out of trouble.  The 38-year old mom of nine has been the focus of numerous Problem Solver stories after FOX31 first reported in August  she was being allowed to keep custody of her seven youngest children while awaiting sentencing for convictions of felony menacing, six counts of misdemeanor child abuse and violation of a restraining order.

Wednesday,  she was arrested for harassment and violation of a protection order.  That followed an unrelated motion on Oct. 4 to have her probation revoked.

On Aug. 29, she was sentenced to five months of community corrections and four years probation.  At her sentencing hearing Stone promised to stay out trouble and attend mental health and drug treatment. 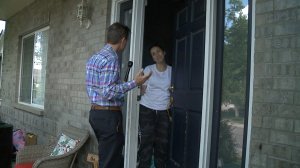 But court records obtained by the Problem Solvers reveal her probation officer filed a motion last Friday to revoke her probation. According to the court document, Stone was hospitalized on Sept. 20 but refused to sign a release of information to allow communication between the medical staff and the probation officer.

The probation officer wrote Stone has made attempts to obtain protection orders against the victims in this case even though she’s been told not to harass or retaliate against victims.  The hearing to revoke her probation will be Oct. 18.

On Oct. 8, Arvada police arrested Stone for posing as her ex-husband “J.D. Stone” on Facebook to taunt and threaten her former neighbor Amber Walker.  Walker has a restraining order against Stone so prosecutors charged Stone with violation of a protection order and harassment.  A detective was able to trace the IP internet address of the Facebook postings made by “J.D. Stone” to Adrienne Stone’s home address.  One Facebook message Walker received on Aug. 25 stated, “I’m pretty sure you will never ever be forgotten!! NO jail time or distance will make anything different!”  Walker told detectives the message gave her the impression that even going to jail wouldn’t deter Stone from possibly harming her family.  As a result of the Facebook threat Amber Walker and her husband decided “to place their house for sale and move away from the neighborhood.” 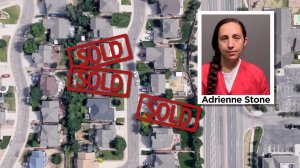 They are now the fourth homeowners who have moved away from the 6400 block of Quaker Court in about a year.  Two of the homeowners tell the Problem Solvers it was strictly because of Adrienne Stone’s ongoing harassment and insist that’s why the other two families moved as well, though FOX31 has not independently confirmed that.

Detectives note many of the Facebook posts from “J.D. Stone” were similar to actual posts made by Adrienne Stone in writing style, font, and phrasing to include the repetitive use of exclamation marks, upper case fond and the reoccurring use of the word “KARMA.”   After Stone was convicted on July 10, she posted, “KARMA is a B**CH!!! Sucks to be you!!!!”

In addition, detectives referenced emails Adrienne Stone wrote to FOX31 Investigative Reporter Rob Low on Aug. 23, the day Child Protection Workers showed up at her house to take custody of her children.  On August 25th she wrote, “You are truly a MONSTER!!!! …KARMA IS A B**TCH!!!!!! If you think you have won, you are SO WRONG!!!!!!!!!!!!!!!” 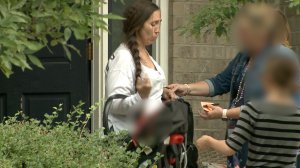 After Stone’s kids were removed on Aug.  23, Amber Walker began receiving Facebook messages from “J.S. Stone” that read “Nobody should cross that line!!!!! YOU crossed that line and caused my kids to be taken!!!! Had news show up at our house!!! Let’s see who laughs last !!!!!!!!!!!!!”

In a statement to FOX31, Amber Walker and her husband  Richard Walker stated:

“For years, we made it clear to Ms. Stone that we just wanted to be left alone. Despite determined efforts to have no contact with her, she never stopped her constant and never ceasing harassment against our family.

Without any provocation, she made it clear to us (and many others) that her goal was to compel people to move from their homes through any means necessary. Ms. Stone has never exhibited any desire to live peacefully in society. After years of silently ignoring her escalating threats, it became painfully clear that nothing other than legal action would have any affect on her behavior.

We are forever indebted to both Fox 31 and Arvada Police Department for their efforts to ensure that this woman is held accountable for her actions.”

Stone is due back in court Oct. 30 for the new charge of harassment and violating a restraining order.  By then she may already be back in jail, since a judge will hold her probation revocation hearing on Oct. 18.

DENVER (KDVR) -- Families living near site of Denver protests over the death of George Floyd are dealing with the effects even as they try to stay away.

"People started screaming and running and then tear gas," said Jacqulyn Murray who lives just a block from the Capitol Building.

DENVER (KDVR) -- The Federal Bureau of Investigation is investigating after a laser was repeatedly pointed at a Denver news helicopter Thursday night.

A spokesperson for the Denver Police Department confirms their helicopter, which was monitoring the protests, was also hit with a laser.

DENVER (BusinessDen) -- The Racines restaurant site isn’t the only spot at the southwest edge of Capitol Hill being eyed for multifamily development.

On the same day last week that Virginia-based AvalonBay Communities submitted its plans to the city for Racines, Atlanta-based Gables Residential proposed a project a block north.

Denver weekend forecast: Highs in the 80s, rain could be heavy in spots