QUANTICO, Va. — Thirty years after Army Spc. Darlene Krashoc was found dead in a parking lot in Colorado Springs, the mystery of her death remains unsolved.

Krashoc’s body was found early in the morning on St. Patrick’s Day in 1987, according to Army investigators.

At the time of her death, Krashoc was an active duty soldier stationed at Fort Carson. She was 20 years old.

According to investigators, the night before her death, Krashoc went to a club named Shuffles at 1861 S. Academy Blvd. with some members of her unit. Investigators say she spent the evening drinking and dancing, and was last seen leaving the club between midnight and 1 a.m.

Patrolmen from the Colorado Springs Police Department found her body several hours later at 5:30 a.m. in the parking lot behind a restaurant at 2710 S. Academy Blvd.

Investigators believe her body was placed there after she was killed.

“After a thorough crime scene examination, collection of evidence, and hundreds of interviews, the case went cold,” CID officials said in a statement released Monday.

Phenotyping is the process of predicting physical appearance and ancestry from unidentified DNA evidence.

“Individual predictions were made for the suspect’s ancestry, eye color, hair color, skin color, freckling and face shape,” investigators stated. “By combining these attributes of appearance, a ‘Snapshot’ composite was produced depicting what the suspect may have looked like.” 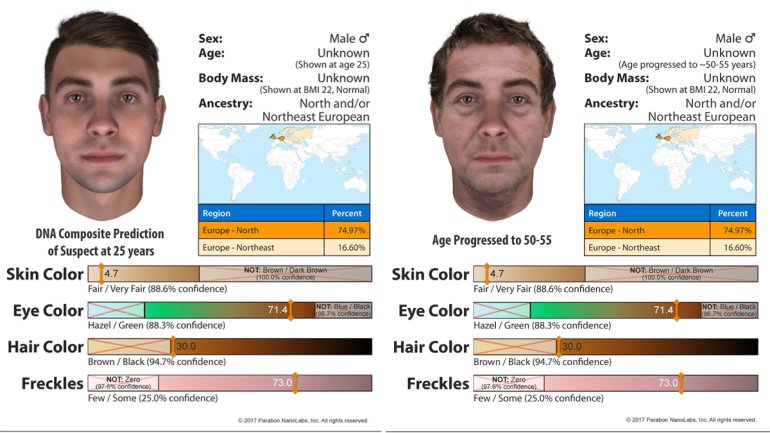 The true age of the suspect remains unknown.

BOULDER COUNTY, Colo. (KDVR) -- A wild scene was caught on camera in Boulder County earlier this week: a bull moose was seen damaging a car with its antlers.

Chris Devlin was in the area when it happened. He captured the moment on camera.

ANCHORAGE, Alaska (AP) — A wild brown bear tunneled under perimeter fencing and killed a popular alpaca at the Alaska Zoo in Anchorage, officials said Wednesday. It was killed a day later by wildlife officials.

The bear had been hanging around the zoo, knocking over trash bins and breaking bear-proof latches before it got under the fence early Sunday when the facility was closed to the public.