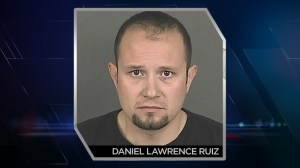 DENVER — The area around a police substation was evacuated Monday morning after police arrested a suspicious person who was reportedly armed with two guns.

The suspect, Daniel Ruiz, was being held Monday night for investigation of felony reckless endangerment and introduction of contraband into a facility.

A bomb squad responded to the District 4 substation in the area of 2100 S. Clay St. The intersection of West Evans Avenue and South Clay Street was closed for investigation about 11:40 a.m. STRIVE Prep Ruby Hill was on lockout status due to the police activity, Denver Public Schools said.

Police reported a “suspicious device,” but characterized the evacuations as a precaution. Officers appeared to be investigating a black Toyota 4Runner SUV with New Mexico plates.

Police cleared the first scene about 12:30 p.m., reopening the intersection and nearby schools.

A home in the 1100 block of West Custer Place was being investigated in connection with the incident, sources told FOX31 Denver. A large police presence was reported in that area.

ALERT UPDATE (2/2): Nothing that appeared to be suspicious was found in the suspect vehicle. Intersection reopened. #Denver