Tennessee’s animal offenders registry includes the offender’s name, photo, date of birth and the charges they were convicted of. 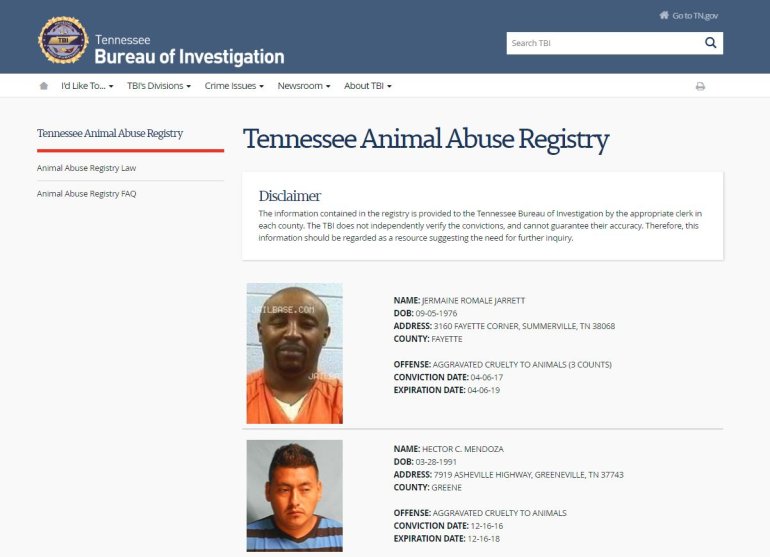 “The original intent was for the list to be used by rescue organizations and shelters as a tool, so that no animals needing a home would end up in harmful hands,” WBIR reported.

Lawmakers told WBIR they also hoped the registry would act as a deterrent and help prevent cases of animal abuse.

While only Tennessee has a statewide animal offenders registry, Suffolk County, New York and Cook County, Illinois have similar databases, according to One Green Planet.

ADAMS COUNTY, Colo. (KDVR) -- A COVID-19 vaccine clinic shut down for refrigeration issues continues to cause confusion for patients trying to get their shots.

The vaccination site at Adams County Fairgrounds closed last week after the Colorado Department of Public Health and Environment learned vaccine doses were not always being kept at the proper temperature. That site is operated by Advanced Urgent Care.

DENVER (KDVR) -- We are forecasting fog and flurries this morning across the Front Range.  Temperatures will be in the 30s early. Skies turn partly sunny this afternoon with a 20% chance of rain showers.  Highs around 50.

The mountains can expect scattered snow showers today with 1-2 inches of accumulation on the high peaks.  Highs in the 30s and 40s.

How long does protection from COVID-19 vaccines last?

Experts don't know yet because they're still studying vaccinated people to see when protection might wear off. How well the vaccines work against emerging variants will also determine if, when and how often additional shots might be needed.

How long does protection from COVID-19 vaccines last?

Cranes created to honor victims of the Coronavirus