James Cook, 33, faces a charge of second-degree assault in connection with an incident that happened on March 21.

Adams County sheriff’s deputies and Brighton police officers were called to a domestic violence incident in the 12000 block of Weld County Road 4, the Weld County Sheriff’s Office said in a news release. 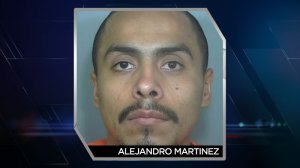 The suspect, 24-year-old Alejandro Martinez, ran from the scene to a location in Weld County’s jurisdiction.

The suspect climbed on the roof of an outbuilding and refused to come down. Cook, an Adams County K-9 handler, climbed the roof to take Martinez into custody.

During the confrontation, Martinez fell off the roof, but witnesses said he was physically forced off by Cook. A thorough investigation by Weld County sheriff’s detectives led them to arrest Cook.

Martinez was taken to Good Samaritan Medical Center in Lafayette for injuries he suffered after falling. He was arrested on charges of criminal mischief, third-degree assault, obstructing a police officer and domestic violence.

The Adams County Sheriff’s Office said Cook was placed on administrative leave pending the outcome of an internal investigation. Bond was set at $5,000.

On Friday, DIA CEO Phil Washington will provide an update on passenger traffic and the impacts the airport is facing as a result of being the fastest recovering large hub airport in the U.S.

Are the Broncos headed toward another losing season?

DENVER (KDVR) — Ordering gifts for loved ones this holiday season is going to be more difficult than in years’ past due to supply chain shortages.

Which is why experts say if you’re looking to make sure your gifts arrive on time, and at the lowest cost, you might want to act quickly.