Boston (CNN) — In many respects it was like a meeting of old friends: James “Whitey” Bulger listening carefully — laughing heartily at one point — to colorful recollections of former Boston bookie Richard O’Brien, who ran a successful bookmaking operation that he inherited from his father.

But this was no remember-when reunion between two elderly men.

The 84-year-old O’Brien, who lives in Florida and uses a wheel chair, testified Friday as a prosecution witness at the federal trial of Bulger, who is charged in the deaths of 19 people during the nearly two decades that prosecutors say he was the head of the Irish mob in Boston.

O’Brien described a meeting between Bulger and a man who owed him money. When the man balked at paying, Bulger replied, “We have a business besides bookmake.” “What’s that?” the man asked. “Killing (expletive) like you.”

The 83-year-old Bulger, who has shown little emotion in the first days of trial, threw his head back and let out a laugh. 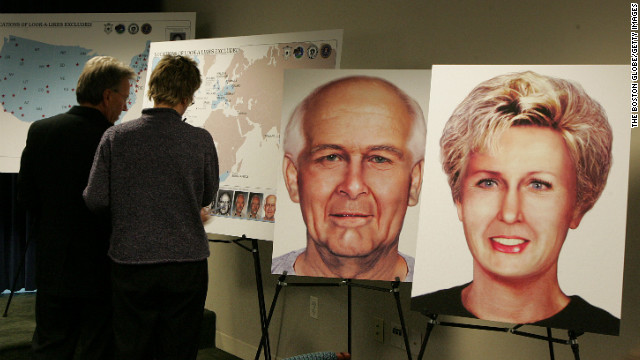 O’Brien said he was an “independent” bookmaker, or unaffiliated with a crime organization, when Bulger summoned him to a meeting to discuss joining the Bulger group.

O’Brien said had been working for the Italian mafia in Boston’s North End but Bulger told him, “Forget the North End. If you want to be in business, you have to be with us.”

He had no choice but to join Bulger’s Winter Hill gang, O’Brien testified, saying, “Their reputation preceded them.”

O’Brien then referenced Boston’s violent gang wars saying, “A lot of people were shot. Mr. Bulger ended up on top. You can draw your own conclusions.”

Thus began a 14-year relationship, with O’Brien testifying he paid Bulger’s group a couple of thousand dollars, cash, in “rent” virtually every month.

Asked why, O’Brien replied, “I valued my life as well as those with me.”

The monthly payment went in excess of $2,000, O’Brien said, and was sometimes higher because Bulger and partner Steven “The Rifleman” Flemmi would charge random “taxes” if, for example, one of O’Brien’s workers found himself at the end of a government wiretap.

Bulger never personally took the money, which was always paid in cash. It was always handed to Bulger’s partner, Flemmi. “Maybe he never wanted it entered into evidence,” O’Brien offered.

O’Brien said he moved to Florida in the early ’90s, turning over the day-to-day operations of his bookmaking business to one of his six daughters. Several years later, he said, he was summoned to a meeting with Flemmi amid rumblings that Bulger associates — including a “father-and-daughter team” — were starting to cooperate with the government.

“The FBI put a higher priority protecting their informants” than they did protecting “public safety,” Foley said.

Bulger’s lawyers are trying to show Bulger was allowed to act with impunity, sanctioned by corrupt FBI agents and federal prosecutors.

On cross-examination Bulger attorney Hank Brennan questioned Foley about the integrity of Bulger’s FBI informant file, which is likely to be introduced at trial, asking the retired investigator why he would accept the informant file as accurate when it was compiled by the same FBI agents Foley believed were lying to him.

Foley said he had other sources but acknowledged he had never checked the validity of the entire file.

Bulger’s lawyers also are trying to establish that Bulger was never a paid informant for the FBI and that instead Bulger was the one paying rogue agents for information.

The trial is expected to take up to three months and has the potential to reveal sensational details about the mob and FBI corruption, especially if Bulger chooses to testify.

Bulger was in hiding for 16 years before he was captured in Santa Monica, California, two years ago, living under a false name with his girlfriend in an apartment in the oceanside city.

At his July 2011 arraignment, he pleaded not guilty to the 19 murder charges and 13 other counts.

Mugshots and names of people arrested in Denver riots

DENVER (KDVR) -- Denver Police released the mugshots and names of 284 people who were arrested in the city's riots over a span of four days.

The list includes everyone who was arrested between Thursday, May 28 - Sunday, May 31.

DENVER (KDVR) -- The Denver Police Department said Tuesday that the officer who published a controversial Instagram post earlier this week has been terminated.

On Monday, DPD said it launched an Internal Affairs investigation after then-Officer Thomas McClay posted a picture of himself and two other officers in tactical gear with the caption "Let's start a riot."

‘Worst speeder we’ve ever had’: Motorcyclist caught doing 108 mph in 30 zone in JeffCo

JEFFERSON COUNTY, Colo. (KDVR) -- A motorcyclist was caught going 78 mph over the speed limit in Jefferson County on Sunday.

The Jefferson County Sheriff's Office says it had received complaints about a speeding motorcyclist on South Turkey Creek Road over the course of a few days.

Mugshots and names of people arrested in Denver riots

‘Worst speeder we’ve ever had’: Motorcyclist caught doing 108 mph in 30 zone in JeffCo