DENVER -- Police have arrested a man accused of assaulting two random teenagers and then beating a 62-year-old man to death in the middle of the street.

The attacks happened near Curtis and 25th streets at about 4 a.m. Friday, according to the Denver Police Department.

When officers arrived, they found two teens who had been attacked in what appeared to be a random incident. One of the victims had significant facial injuries, according to the probable cause statement.

A witness told officers the attacker had run to the 2400 block of Curtis Street after the assault.

The officers said they saw a person lying in the middle of the street and a man was "continually striking the victim in the chest with force."

The suspect was later identified as 28-year-old Dejuan Stamps. The officers said Stamps "rushed" them when they challenged him. 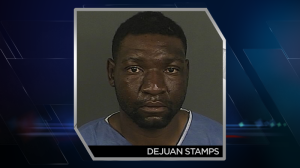 One officer was injured in a struggle, but police were able to subdue Stamps, according to the probable cause statement.

The victim, later identified as 62-year-old James Farmer Jr., died at the scene. An autopsy confirmed he died from blunt force injuries.

Farmer's son said his father came to Denver from Seattle for a job.  James Lee Miller said room and board had filled up or his allotted expenses for it ran out.

Miller said his father was staying in a shelter and his black Saab so he could save money from the job because he was going to move back to Seattle in September to buy a condominium with his fiancee.

Witnesses said he heard the commotion and got out to help, but ended up becoming a victim.

Officials at the Saint Francis Center knew Farmer and described him as "a good man."

"People who know what's right, do what's right. And he was one of those people who did it. He stepped up to help. And unfortunately, it cost him his life. But he was a good man," a shelter official said.

Stamps was also homeless but had been banned by the homeless shelter last month, officials said.

After the attacks, Stamps was transported to a hospital for evaluation and was placed on an investigative hold for first-degree murder.

DENVER (KDVR) -- Many hospitals and nursing homes are dealing with a shortage of personal protective equipment, including masks and safety gear to keep nurses and doctors safe.

However, there are hundreds of others also working at these facilities who are also at risk for coronavirus, and now some of them are walking off the job.

According to the Post Independent, the rule applies to both residents and retail workers. It will stay in effect until at least April 26.

DENVER (KDVR) -- The family of a Colorado man fighting COVID-19 says his condition has improved since receiving an experimental treatment days earlier.

Scott Kaplan is one of the first patients in the state to receive a convalescent plasma transfusion. The treatment involves taking the plasma of a person who has already recovered from the virus and transfusing it into the blood of a current patient. The treatment is designed only for severe cases.

Denver rabbis move to virtual Seders to usher in Passover

Spring showers ahead in Denver, then snow returns for Easter