GRAND JUNCTION, Colo. — The 11-year-old boy who was shot to death in Mesa County on Saturday has been identified as Caden Randolph of Grand Junction.

Randolph was shot in the chest, the Mesa County Coroner’s Office said in a statement released Monday.

Randoph was shot Saturday at 3060 Sandpiper Ave., the Mesa County Sheriff’s Office said. He was transported to St. Mary’s Hospital where he later died. 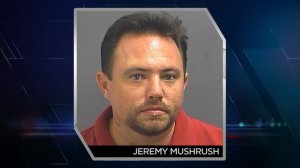 Mushrush was not detained or arrested at the time and was free to leave after he gave a statement, the sheriff’s office said.

“After he left, information came to light that implicated Mr. Mushrush in criminal activity,” the sheriff’s office said.

Investigators obtained an arrest warrant for Mushrush for manslaughter and attempting to influence a public servant, both felonies, and prohibited use of a weapon, a misdemeanor.

At about 10:30 a.m., deputies and Grand Junction police officers found Mushrush’s vehicle at the Woodspring Suites in Grand Junction.

“At about this same time, Mr. Mushrush called dispatch and advised he had heard that law enforcement was looking for him, and he agreed to meet with deputies,” the sheriff’s office said. “At 10:38 a.m., Mr. Mushrush agreed to turn himself in and he was arrested without any resistance or incident.”

Investigators have not said what led to the shooting but said Mushrush is not related to the victim.

All documents related to the case have been sealed by the court.

DENVER, Colo. (KDVR) - A Denver Sheriff Department deputy has been suspended for 14 days for failing to take proper action in a jail incident in which multiple deputies piled on top of an inmate as he was being moved to a new cell.

Some of the deputies and the inmate were hospitalized after the incident.

BRIGHTON (KDVR) - Members of the Automobile License Plate Collectors Association were excited to be at their show Friday at the Adams County Fairgrounds, especially considering COVID-19 prevented other similar events from happening.

License plate collector Mike Wiener from Albuquerque New Mexico lives for days like this. An opportunity to show off some of the license plates in his "modest" collection of  over 200,000 plates.

WESTMINSTER, Colo. (KDVR) -- Governor Jared Polis is providing an update on the state's response to the COVID-19 pandemic.

Information from the news conference will be posted following the conclusion of the event.