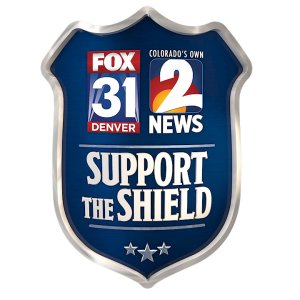 FOX31 and Colorado’s Own Channel 2 are excited to launch the second year of the Support the Shield campaign, which supports law enforcement officers and their families. Building on the momentum created during the inaugural campaign last year that raised more than $680,000 from across Colorado, the stations will be hosting a phone bank, encouraging viewer participation, and again partnering with the Safeway Foundation for a donation drive.

The month-long campaign runs from Monday, April 1 through Sunday, May 5.

This year, there are two beneficiaries for the campaign: Shield 616, which provides rifle-ready protective gear for first responders, and C.O.P.S. (Concerns of Police Survivors), which supports survivors and co-workers directly affected by line-of-duty deaths.

“What our community was able to do during last year’s Support the Shield campaign reflects the respect and support we have for our members of law enforcement,” said Joan Barrett, Vice President & General Manager of KDVR-TV and KWGN-TV.

“Having the combination of a fantastic partner like Safeway and a community who rallies behind noble causes, I am confident we will see another successful year for the Support the Shield campaign.”

Donating to the campaign can be done in several ways

“The impact this campaign has on our law enforcement community is extraordinary and we are proud to again partner with FOX31 and Channel 2 News as they provide a great boost in helping raise awareness of the campaign,” said Todd Broderick, President, Albertsons/Safeway Denver Division.

“Last year’s campaign was a tremendous success and we look forward to taking it to the next level by adding more protection for our officers and support to the families who have lost an officer in the line of duty,” added Broderick.